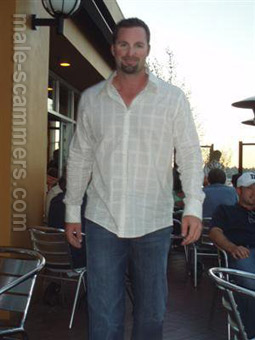 REPORT N1 (added on February, 7, 2013)
Yvette (South Africa)
I joined meetme.com in December 2012 and about two days later Paul Albrecht, male 42, London, GB initiated contact with me. This was my first encounter with 4th kind in cyberspace.. U get woman, males, just plain weirdo's and then. u get the scammers..
He asked for my email address and yahoo id which I gave to him. We started chatting and he sent me a long email about his life. Wife died of breast cancer 2 years ago, he is raising a 5 year old daughter, named Sonia. Art Gallery owner in London and he was on business trying to obtain a contract at Harmony Gold in Cape Town, South Africa. Both parents are dead and so on. He closed his account on meetme.com and asked me to do the same, which I did. I was totally infatuated, fascinated and flattered by all the attention and sweet talk. He phoned me about twice a day and constant sms was sent to me by him. Part of me said this is 2 good 2 be true and as per my nature I started asking questions and serving the net to find some sort of validation in all his claims. Things just did not add up. They are so scrupulous I even spoke to his daughter and he was going to buy us a sweet house for our sweet family and so on..
Two weeks before he asked me for cash to help him out, I already knew he was a scammer and my questions to him intensified, he was too stupid to even notice lol.
. Asked him for photos, he is not a pics man
. Asked him 2 take photos, sorry he has a small Sony Ericson that does not take pics
. Asked him 2 take pics on a camera, he says he had clients from Spain and they dropped and broke his camera.
. Name of art gallery, Paul Art Gallery, I served the net and it does not exist
. He owns a home in London, I could find no such details on the registrar roll for London
. I kept on insisting to speak to his daughter and I managed to do so ones, and she did not sound like a five year old and could only say Hello and I love u Mummy.
. The phone# 0044 I discovered on the net is what scammers use to divert calls in order to make u think that u are phoning London.
. He went to the Art Expo in London, which I could serve and look at, but if that was not enough he was a guest speaker at the opening of the expo. Well I searched that 2, and of course nothing on a Paul Albrecht being a speaker
. Traced his I.P address to Dublin in Ireland. IP 212.82.108.134
. I.P address has been listed on other sights for spam mail.
. Asked him about the hotel in Kuala Lumpur, he said Alankit, ai there is no such hotel
. Western Union details to be paid, PAUL ALBRECHT, 1A JALAN BUKIT BINTONG, 551, KUALA LUMPUR.
. South African bank account: GODONA CATERING SERVICES, STANDARD BANK, 041012953
. Phones numbers, 0044704570694, 0785325923 and 0717136429
. His physical address, Laleham Road, Catford, SE6 2HX, London, England, well I doubt it, he would not give me the unit number
Anyway the day he asked me I was prepared and spinned him a stoty about not having a bank account and so on lol.. Ai the scammer was played at his own game ;)
Need I go on, I have all his emails, pics and yahoo messenger text that I want to upload to ensure that woman do not fall victim to these heartless scammers.

Romance scam letter(s) from Paul Albrecht to Yvette (South Africa)
Hello Yvette am glad we can now send email to each other and this really I know will make us get to know better of each other and start to grow feelings as days and times goes by.Yvette Let me tell you a little about me, Well I have being singe father since the past 2 years after my wife died of breast cancer 2 years ago and honestly speaking its not being easy with me being a father and also single with lots of busy business deals to handle but I have cope all this past years and its really make me time to healed from my pain of losing my dear wife. I am healed now and at this point of my life I so want some one to share the rest of my entire life with till end of time.

I am very successful businessman I am into art works business I buy and sell art works from all over the world and I also own an art gallery back in London were I am base and own a home too, I of recently want to venture into Gold mine that is why I am here now in South Africa and wow I am really
Read more