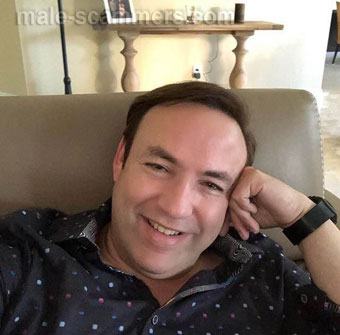 REPORT N1 (added on August, 10, 2018)
Dobby (USA)
Michael Walters said he was from the UK, was born and raised there, and lives in Miami, FL. He lost his wife in an auto accident 12 years ago, has two children - Kimberly age 12, and Drake age 14. Michael said he is Baptist.
Michael was also talking to another woman and trying to work a banking scam on her. When he began talking to me, the other woman - a scam investigator - and I tried to see who could catch him first. She beat me, but Michael's scam stories were totally different.
I was just some rich woman whose divorce would become final in a month. I wanted to redecorate my living room and dining room and needed some artwork in certain colors. The scam investigator happens to be an artist in real life, and I was hoping to buy some from her through him and pay him a commission, but he did not make that connection.
I invited Michael to join me and my family over the Labor Day weekend at my home. We would be grilling steaks, swimming, and having a really good time. He could not make it because he had to go to Taiwan to work out details for his pension when he retires soon.
Michael has worked as a "world class senior TV representative for ten years and made a lot of money." Then he told me that his main job is an independent contractor for drilling on high seas for Exxon. He left Florida and went to Istanbul, Turkey, to set up his drilling platform and begin drilling for oil. I asked him if he had everything he needed, if there was anything I could send him that he could not get in his present location.
In less than a week, his careless workers lost equipment into the sea, stripped threads with bolts, and caused about $45,000 in damage. He didn't bring enough cash with him to take care of repairs, only to sustain his men during the contract period. He could not access his credit card, and he was completely stressed out. The contract was worth billions, and he did not know what he was going to do.
Michael was determined that he was going to marry me when the contract was complete and he would be returning to the States to be with me and meet my family. I told him that I'd been saving for years, putting money into an account without telling anyone about it. I had also won $30,000 from a scratch off Lottery ticket and quietly added that to the account. I probably had $95,000 in savings. Oh, it would just be wonderful if I could help him. I told him I'd thought about sending him the $30,000 I'd won from the scratch off ticket, and that would not interfere with my own savings. He asked if I could up that amount to $45- $50,000. I later told him I would add another $10,000 so he would have a pad, for a safety net, in case something else went wrong. I wanted to send the money in a manner that I would get a signature.
He told me he would get the details from his diplomat for a bank wire transfer. I explained that I would talk with my attorney, Larry Jordan Rowe, first and perhaps ask him to write a contract to protect both Michael and myself. I gave Michael the email address for my attorney and asked that Michael's diplomat get in touch with him. (Larry Jordan Rowe is the attorney given the scam investigator by Michael in his banking scam, but he gave a fake email address for the attorney.) Michael nearly panicked. He did not want any outsiders involved with this transaction, for security reasons. He insisted that I send him the money by wire transfer. I continued to resist. He became angry because I, as his wife, was not obeying him. He wanted the wire transfer; I wanted a signature for receipt of the money.
It took him the whole weekend to get the bank routing numbers and his private diplomat's name for me. He learned that I have no patience. When I ask a question, I want an answer. I don't want to hear a lot of talk about how I am his gold, diamond, and "silva." Otherwise, I am kind, gentle, caring, generous, thoughtful, and businesslike. (It does not take me an hour to say "Goodnight.")
Michael spent two days arguing with me about how I should listen to him and send the money to the bank routing numbers. He made every excuse he could think of why it would be better for his private diplomat to carry $60k around on a plane, on a ship, get onto a speed boat from the ship and boat to the rig to deliver the money. I made every possible excuse not to send it that way, that it would be better for him to land at port, go to the bank, get the money, and take it to the rig.
When I finally agreed with him that it was better to let him take care of his own problems and for me to do my own thinking, rather than obey him. I would not send the money, Michael freaked out again. He cursed, insulted me, took the Lord's name in vain, and disrespected me. I sent him a picture of himself and another boy that he had sent the scam investigator, and he asked who those young black boys were. I gave him a link about wire fraud and blocked. him.
The banking numbers are here: TD Bank: 25 prospect st Framingham, MA 01701 Account name is: Samuel Ayekple A/C:8256648468 Routing:211370545