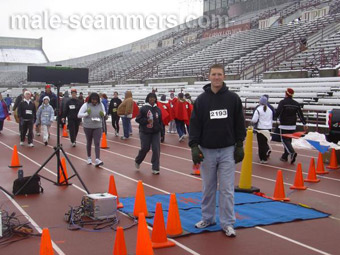 REPORT N1 (added on January, 23, 2013)
Cathrine (India)
This man so call Sean Grant sent me an interest on Asian Euro and told me that he is head over heels for me when he saw my pic. As he used a fake name and a fake pic on his profile I also sent back my interest as he sounded so genune and also sent me a mail saying that he'd try a single date out with me and he immediately switch off his profile this made me trust him so much. he started sending me mails on a regular basis with a romantice poems and told me about his so called unfortunate story of his divorce.He has a 6 year old son name Graham and that he was looking for a nice mother for him. He told me that he has a Art gallery in West-minister London and a house of his own. According to what he told me he sounded like he is financially secured and all he needed was a loving wife. Well he basically wooed me with his sweet talks and I actually belived him. A few weeks later he told me that he would come to see me soon but had to go to Africa first for Art and craft exhibition along with his son. So he arrived africa but his son so called Graham got sick ..had to admit him in the hospital and the doctors have gharged him 1200 us dollars and he dint have sufficient cash with him and he couldn't use his credit card due to poor internet facility and bad weather LOL ...What bad weather ? lol I checked the weather forcast scammer it says 34 degree hot and humid haaaa . Well i wasn't feeling good about it so I came home check on the net and also verified certain things I verified the fake flight ticked he sent me on mail ....found out that he is nothing but a useless scammer. However all he asked for was 550 usd but hard luck ,...even though its not a big amount I pitty that there are such kinda people who exist. May their soul burn in hell.
REPORT N2 (added on February, 21, 2013)
Hanna (Indonesia)
The story already post by Catherine from India on Jan 23, 2013. But in my side he called him Self as miller Kelly and his son is Peter Kelly. Looking for a lovely mother to peter. He married on 2006 and his son born on 2007 unfortunately He divorced with his ex wife on 2010. In the stories he looks like a great father. The live at 152 west-minister bridge road London se 17rw. In the third email he Want me to marry and become to peter mother.
What???? Hmmmmmm it's looks like weird. So i decided to search in Google his phone number that he give. Thanks God i found this number in here. I already asking that he had skpe but he never reply my question.
Thanks to male-stammer.com and becareful girls.

Romance scam letter(s) from Sean Grant to Cathrine (India)
LET ME START BY INTRODUCING MY SELF,MY NAME IS SEAN GRANT,AND I AM 49 YEARS OLD AND I AM DIVORCED FOR ABOUT 3 YEARS NOW.I AM FROM RES TON VIRGINIA USA,BUT RESIDING IN WEST-MINISTER LONDON.AND I AM THE ONLY SON OF MY FATHER AS MY MOTHER ABANDONED US WHEN THINGS BECAME DIFFICULT.AND SUBSEQUENTLY MY DAD DIED FROM THE NEWS OF HER DISAPPEARANCE.THAT IS HOW MY LIFE BEGAN ALL ALONE.

I WAS TRAINED TO BE A ART AND CRAFT DESIGNER,I FINISHED MY FIRST DEGREE IN LONDON ENGLAND.AFTER I HAD GOTTEN MARRIED TO MY EX WIFE.AS AN ART AND CRAFT DESIGNER I STUDY EVERYTHING THAT HAPPENS TO BE ART WORKS AND CRAFT,IT IS MY DUTY TO DETECT AND DRAW GOOD ART WORK.I PRESENTLY OWN A GALLERY,(GRANTS ART GALLERY) IN WEST-MINISTER LONDON WHERE I RESIDE WITH MY SON

I WILL TELL YOU MORE ABOUT MY SELF AS WE GET TO KNOW EACH OTHER BETTER.BUT IT IS IMPORTANT TO NOTE THAT THAT MY WIFE AND I ARE DIVORCED, WE GOT MARRIED IN MAY 2005 AND HAD OUR SON GRAHAM) IN FEBRUARY 2006,AND FINALLY DIVORCED IN MAR
Read more

Romance scam letter(s) from Sean Grant to Hanna (Indonesia)
LET ME START BY INTRODUCING MY SELF,MY NAME IS MILLER PETER,AND I AM 49 YEARS OLD AND I AM DIVORCED FOR ABOUT 3 YEARS NOW,MY SONS NAME IS KELLY PETER AND TOGETHER WE RESIDE AT 152 WEST-MINISTER BRIDGE ROAD LONDON SE 17RW.I AM ORIGINALLY FROM GLEN ROSE TEXAS USA AND I AM THE ONLY SON OF MY FATHER AS MY MOTHER ABANDONED US WHEN THINGS BECAME DIFFICULT FOR US.AND SUBSEQUENTLY MY DAD DIED FROM THE NEWS OF HER DISAPPEARANCE.THAT IS HOW MY LIFE BEGAN ALL ALONE.

I FINISHED MY FIRST DEGREE IN MANAGEMENT HERE IN LONDON,AFTER I HAD GOTTEN MARRIED TO MY EX WIFE.I ALSO TRAINED AS AN ART AND CRAFT DESIGNER AND MARKETER.I PRESENTLY OWN A GALLERY,(GRANTS ART GALLERY) HERE IN WEST-MINISTER LONDON WHERE I SELL AND DESIGN ART WORKS.

I WILL TELL YOU MORE ABOUT MY SELF AS WE GET TO KNOW EACH OTHER BETTER.BUT IT IS IMPORTANT TO NOTE THAT MY WIFE AND I ARE DIVORCED, WE GOT MARRIED IN MAY 2006 AND HAD OUR SON GRAHAM) IN MARCH 2007,AND FINALLY DIVORCED IN MAY 2010 . I
Read more