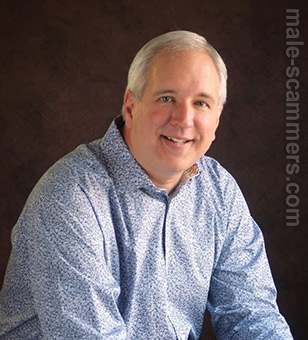 REPORT N1 (added on July, 2, 2018)
Marianne (USA)
We met on Plenty of Fish early January. Larry contacted me the first night I was on Plenty of Fish. We developed an online relationship and I learned that she actually looked quite different from the picture I had seen on Plenty of Fish. He claims to be a widower and he kept busy with Consulting work which at the time took place in London, England. I had suffered a tragic accident back in October with multiple injuries, so when he told me that his son who was working as an engineer in China had suffered a terrible fall off a bridge, I was very sympathetic and encouraged him to go be with his son. Larry texted back after arriving in China to let me know that he was not able to use his debit card. He needed money. Later he needed money to help pay doctors, physical therapy, transportation from the hospital to the airport, his own heart medication, and food. Then Larry and his son Pete left China but I never received any news about the arrival back in the States. I eventually received a message that they had an emergency landing in Abu Dhabi in the United Arab Emirates. They were safe, but they needed money for while they were sleeping at the airport terminal, medication, and to get Pete up to his grandmother in Dubai. Larry then fell ill supposedly and needed to be hospitalized in Abu Dhabi. He, once again, needed funds for the hospital, for food, and for medication. Then he wanted funds for his flight from Abu Dhabi to Denver to come see me and to repay me. I broke it off with Larry towards the end of April, feeling utterly misused and played for money. I had not worked since October and my disability kicked in in April. He had wanted me to give him my disability check and he kept pressuring me. That's when I broke it off with him. I told him to not bother coming to Colorado, but to just fly home to New York instead. I do not remember whether he contacted me or I contacted him, but several weeks ago I found out that he was back in New York. I did not keep track of all the money I had loaned to him, but he suggested to repay me with $7500. He tried to pressure me for more money to pay for his car repair so he could go to the bank and straighten out some Financial stuff. They also supposedly never mailed him his new debit card and then he wanted money to drive to the bank and to call the bank so that he could send me a cashier's check. He claimed to have sent two checks, but did not send them overnight. Instead he said that he sent them regular mail service. Needless to say, I never received any of the checks. I then requested that he would pay in person and he told me that he took a flight to Colorado last Monday. He called me late Monday night saying that he had arrived. But he never told me where he was staying. He threatened me several more times this past week that he needed money to put on his phone so he could text me his location. I sent him a $50 iTunes card, but he never texted me his location. According to a GPS app for my Android phone, he is still in New York. He denied that, stating he is here in Colorado Springs but he won't tell me where he is. He promised we would meet while he's here and he would repay me. None of that ever happened. A hiya caller ID app also identified him as George from New York. He never sent me his address, but I have his address from an itinerary that he had sent me from a flight booking somewhere overseas. He also insisted on my buying iTunes cards and texting them to him with a photo, rather than ordering them online and having them email to him. When I tried emailing one to him the other day his email showed as not being a valid email. Supposedly he also got very sick again this week and is suffering from high blood pressure, which is why I need to give him time supposedly and why I need to be reasonable with him. This man cannot be trusted. I feel so foolish for ever having believed him, but I hope this report will spare some other ladies a lot of hardship.