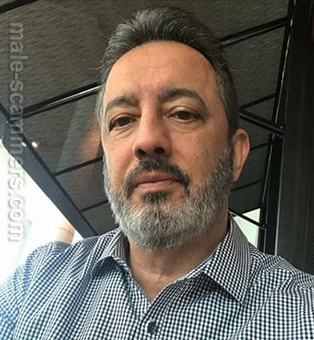 REPORT N1 (added on June, 15, 2018)
Carmen (Spain)
I met this guy on ConnectingSingles, George Raffa, aka amgeoraff, and after a month of chatting, he still refuses to video chat. Then he ask for 1600$ for lawyer. When I said no, until we video chat, then he declares he was a friend of the real George Raffaele, and his name was George Massimiliano, and sends me another set of pictures, a totally different man and asking for 500$ gas money.
REPORT N2 (added on July, 10, 2018)
Cia (Sweden)
W.B texted that his wife died in breastcancer 5 years ago and that he has a daughter called Joyce who are in school in USA. He works as a sales marketer involving copper- and cablewires for telecommunication in and outside England, owns a shop and sometimes goes out on contract. W.B. belongs to Windsor Baptist Church.
He tried to schedule what I was doing and sent many messages everyday on Instagram. Started in late February or the beginning of March 2018. Sent me poems every morning saying good morning, at first I didn't know what to reply. Then later we texted a lot, he sent me songs from You Tube Celine Dion at first My Heart Will Go On, I think he saw it on Facebook that I like her. Also that there is a memorial of Titannic in Belfast where he claimed to live.
At first he wanted me to download WhatsApp, then I should buy a iTunes card and at last to send money to his daughter in USA when he claimed to be in Uganda.
REPORT N3 (added on November, 28, 2019)
Belinda (South Africa)
Declared love within a week. Didn't chat much mostly sending poems. After 3 weeks of chatting said so happy he got a contract and wants to send me gifts. Send pictures of jewellery, iphone, ipad, laptop, shoes etc. Note he never asked what size shoes or clothes. Then got call from supposedly courier company and that i need to pay R4000 for taxed. Courier sounded like a Nigerian. Account Mr BI Sethunya Captitec Bank 1652341011. Could not send me invoice or waybill or anything. When I didn't pay Patrick started sending nasty message that i need to pay as courier puts him under pressure etc. I informed him i never asked for gifts or anything and I refuse to pay. He told me he was very disappointed in me and ceased all communication.