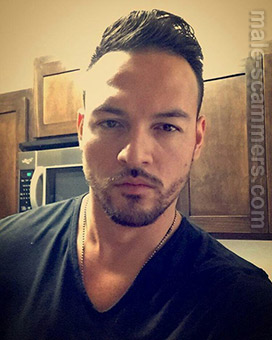 REPORT N1 (added on June, 1, 2018)
Alice (UAE)
We've met through Tinder when he was in Dubai and asked for my number.He iniated our first chat on 4th April this year through whatsapp. He introduced himself by the name Ryan Nelson King.He said that he's been to Dubai for 3 days to attend a meeting.He said that he's Director if a small scale Gold firm in New Jersey. I got interested becuae he said he's half Filipino and half American.He's planning to visit again Dubai by end of April as he didnt have time to explore Dubai and I will be his tour guide.He told me his life story that he lost his family in auto crash 25 years ago ehen he was 12 years old and after the burial he lived with his dad's friend(Benson).He has to live the house when he was 14 because of the maltreatment of Anna(Benson's wife).He has to live with his friend to continue his studies till he became a successful businessman.He has to divorce his wife(Victoria)becuase he caught her having sex with his bestfriend(Kyle).Everyday, he would send love messages including songs.He would share his favorite food,hobbies and places.Till he told me that started to fall inlove with me.I was requesting him to install IMO or Judt talk apps but he said he's not fun of apps and only whatapp he has he said he's managing his phone.He never iniated a call and I was the one callng him in his New Jersy number.Till he told me that he needs to go to Nigeria as he got a contract in Lagos for a Gold mining site.He sent me his flight itinerary on 19th April the day he travelled to Nigeria.He gave his number in Nigeria and sent me the business contract that he signed.When he's about to leave Nigeria on 27th April, he asked me that when he arrived in Dubai I need to resign and come with him to get married. He asked me my salary and day I would normally received. I gave all details.When he's about to leave, he said someone took his wallet including his cash,identity cards and atm/credit cards.He said good thing his passport is in the hotel.He said that he needs to settle all bills and pay the workers in the mining site. He would need $3,000 to settle billls.I told him that I dont have money to send him and asked him to ask his friends or relatives. He said he doesnt have anyone and only me his hope.Ive sent him the money through western union under Akeem Abdul Azeez and Sarah Oluwatoyin Azeez names.When he received the money,he said he will settle the bills and fly to Dubai.On May 1, he sent his Dubai flight itinerary including the receipt of Emirates flight.When he's about to check in, the gound cree asked him for his Dubai hotel confirmation.He said that he's argued with them and they have to check his bag and found a gold nugget that supposed to be given to me as a surprise gift.He said that he was detained and took his passport.He needs to pay taxes $1,300 to get out and fly to Dubai.Again,I sent him the money through western union under two different Nigerian names.When he got his passport he said that he needs to go back to New Jersey to settle bills and send back the money I sent him.The day his flying to New Jersey,he blocked me temporarily.I called his number in Nigeria that he used,it was ringing and somebody answered the phone..it was his voice he just pretending to be a Nigerian accent.I called his New Jersey number as well and it was ringing.I got confused and started to think negative about him. I fell inlove with him and he used my emotions and sadness to get money from me.I didnt realize that all the love messages he sent me was forwarded only as it's impossible to type long messages in one minute..meaning besides from me he has other victims and he has ready made love messages.He's handsome and has good physique..no wonder, he has so many potential victims as he's online all the time.He seems si decent in his messages and pictures.H e would always include God in his message and always make a promise that He's deeply inlove with me and he'll marry me and he swear to God to fulfill his promise. Now,he stopped chatting with me..but I send him text everyday to return the money.I told him that he deceived me and he's worst than a killer or criminal. My message was seen only but no reply.Our communication lasted 1 and half months.Total money he took from me is $4,300 till I found out that his a scammer.
REPORT N2 (added on September, 5, 2018)
Bev (USA)
Been talking to him for 2 1/2mo. since mid-May of 2018. Claims to be in business buying Cocoa Beans along with 2 long time college friends.Says has a 9yr daughter cared for by dead wife's Mother/Grandma. Has now been in Africa getting Cocoa Bean contracts for 2 mo!! Has tons of photos that back up(supposedly) where he is and what he is.
A bout a month ago he asked me to cash a $3,000 check if he had it sent to me. Keep some money and send me the rest! He did not want he Buddies to know he was running low on money!! Ha!
REPORT N7 (added on September, 7, 2018)
Jananee (UAE)
Dating Scam - exact same story shared by Alice.