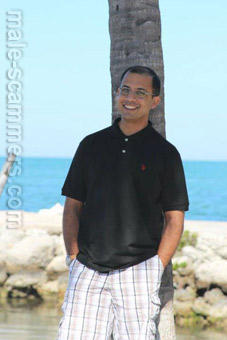 Romance scam letter(s) from Harish Raman to Anne (UK)
Hi
Am Harish Raman
i live in Dallas Texas.
I'm new here and have had my eyes searching for someone special, unique and exceptional...then I bumped into your profile and saw no other reason to continue my search.
Your profile is very interesting and I thought I should throw a caution to the wind and drop this note to you, I must say your profile its so warm and welcoming.
I'm an honest, caring, passionate and loving romantic man With a great sense of humor...I am not getting any younger, and I need a soul mate that I will love and is willing to spend the rest of her life with the man she truly deserves, Who knows?...I will love to know more about you and communicate further with you, please feel free to get back at me if you really want to take this further...
Take care and I wish you have an awesome day, looking forward to read from you soon...You can send me an email.
on harishraman47@rocketmail.com
Regards
Harish

Romance scam letter(s) from Harish Raman to Uma (USA)
Hi Uma,
How are you doing out there,i hope you are doing great? Thanks for your email and your beautiful pictures you sent to me i really like them and have been looking at them for hours now, i most say you a very pretty woman, I feel so different anytime i read from you. Anytime i put on my computer, long in online to look for your letter,i feel so happy,whenever i set my eyes on it.I can see your are an open minded and that is what i need from a woman,someone that don't hide a thing.Life is too short to be alone,i have come to understand the way of life, i don't judge people from their out look,i look inside their minds.I have a caring and a jovial attitude that like to adopt in anywhere i am.but i am an indoor type,since i don't have a woman to have fun with. It has been a while now,i have no one to share with or share how i feel.I have been living this way,hoping to meet,that woman of my life,when i came to your profile,i was inspired to write to you and i can
Read more