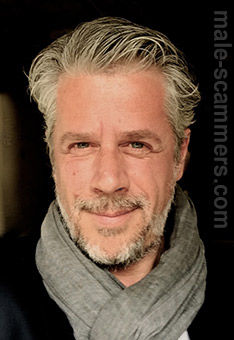 REPORT N1 (added on April, 11, 2018)
Marie (Sweden)
He contacted me on Tinder. He says he will move to Gothenburg in a week.
He says he work with railways.
He told me what hotel he will stay at the first week.
I make a joke about that he seems to be to good to be true and maybe are a scammer.
He got very offended.
He wrotes am instead of l am.
REPORT N2 (added on April, 20, 2018)
Viv (Belgium)
I met him on Tinder. He started chatting and gave many compliments. that same day he asked to skype. We skyped for 4 minutes. He seemed very nervous and uses this to show he's real. He says he works on railways and said he lived in Athens as he had a contract for 6 months. He would move to Brussels a week later. He would be living in the center and stay 1 week at the hotel. His parents died, mother was Hungarian accountant and father a lawyer in New York. He said he took over the accent of his mother. That was his excuse for his English. Some messages he send were in very good English, those who were not prepared had a lot of spelling mistakes and were of poor English.
After a We chatted for 4 days. The evening of the 4th day of chatting and getting more intimate, he called me that he was sad because he had problems on his work. He needed to cash a cheque and the bank refused because of the economic crises. He said he had to pay his workers and 2 of them, Albanian men, didn't agree. He told me they started yelling and that he was taken by the police and couldn't leave the country before he'd paid those guys. He needed my help. He wanted to transfer 4.000 $ form his US account @ Bank of America on my account and I had to lend him the money upfront and send it through European transfer. I asked him for the account details and he gave them to me. I started looking for information and found out he was a scammer. I refused and he got mad an started to insult me. I told him I knew he was a scam. I blocked him.

Romance scam letter(s) from Enzo Masson to Marie (Sweden)
I'm feeling blessed right now that you chose to talk with me and hopefully get to know each other....

A little more about me...
I'm single because my girlfriend decided to be come a lesbian and left me for another girl, I feel so ashamed saying this but I just wanted you to know that, I'm not lucky with women so I'm hoping to find the right love soon...

I work many hours because I choose to really I always take on many projects, I am selfish that way I want to be the one to complete them in perfection...I have made a good life and I just enjoy working because it is what fuels me really... I don't date much so it is what I put all my time in haven't found something to focus on that will make me happy it has been a while since I felt love and honesty, real trust and belief in someone....I am very passionate about life and focus on everything that makes me happy and the people that I love happy...

My folks have both passed away, they had me at a very late age
Read more