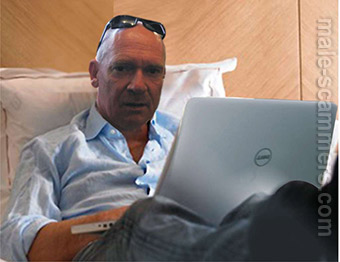 REPORT N1 (added on February, 19, 2018)
Kay (USA)
We met on POF. He wanted to text or go on Hangouts after a few exchanges. He did declare his love right away and we continued to correspond. Just recently he said he had to attend a business meeting in Los Angeles where he hoped to get a big contract that would help his business get on better footing. His wife had cheated on him years before and when they divorced, she nearly bankrupt him. This contract would put him back in good financial situation. I have had this same type of scam tried on me about a year ago. I told him that if he got the contract and had to go overseas he should make sure to have his finances in a good shape because if he needed extra money once he got there, I would not be able to help finance his business. He said he would take my advice. He went on this meeting last Monday, flying from SF to LA. His meetings were going well until he suddenly need an iTunes card to update his computer. He wanted me to get him one. I said no that I told him I didn't have extra money to send him a card. He said he wasn't asking for money just a card. I asked him if he thought they would just hand me a card. I told him no, they want money for those cards. We proceeded to have an argument and I accused him of being a scammer. He got angry, began to curse me and told me I was old and ugly. He said he was going to send copies of some of our more romantic chats to my family and kids. He said I claim to be a Christian and this is the way I conduct myself. I said not only was he a scammer but also he was trying to bribe me. He then called me by phone, continuing to run me down. I hung up on him and blocked him.
REPORT N2 (added on February, 27, 2018)
Judy (USA)
Been talking to him for two and a half yr.s met him on ourtime.comover50. Just saw same pic. He sent me on nigeriascammers.he scammed me out of $12,000.00.I'm a widow64yr.sold and money was from settlement from fire. He just sent me roses but haven't talked to him for a Month. Last we talked something was going with people yelling and noisy in back ground. I want him put in jail. On the Nigeria scammers list he went by David Huges. I would love to talk to someone else he scammed.