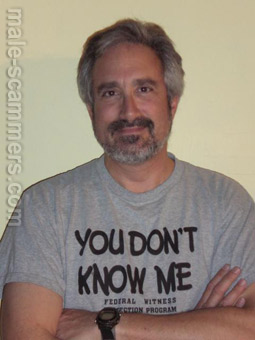 REPORT N1 (added on December, 8, 2012)
Doe (UK)
Said he was born in Germany and came to live in the UK when he was 7. His wife died 6 years ago and he has a son of 17 who is at boarding school in London studying law. He works in security for government agencies and travels all over. His 2 previous relationships ended because "they were after his money". Very attractive photographs some taken with corgi dogs. I got an IT company to trace the country where his emails were being sent from. They were originating in Ghana and being routed through Corona in California.

Romance scam letter(s) from Dickson Krause to Doe (UK)
Hello Doe and it is good to read from you once again.The image i have on the site was taken early this year..it skipped my mind completely when i was writing to you the previous message..I am a government official with the security and defence department..I will like for us to have a chat later when you can make the time so we can share more about each other..Let me know when will be a convenient time for you..
Look forward to reading from you soon..
Best regards..
Dickson.

Hello Doe,here is a little about myself,I was married for 25 years until i lost my wife 8 years ago and i have been on my own since then..i have a boy who is in college in London..My dad is originally from Germany and my mum is from Manchester..I grew up with an uncle in London and i later moved to the united states to further my education and that is where i met my wife..My hobbies and interests include music (jazz, pop, country, opera, old rock and soul), movies, readin
Read more