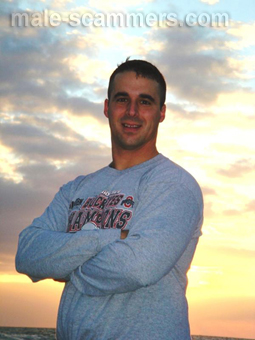 REPORT N1 (added on November, 27, 2012)
Sarah (USA)
I TRACKED HE IP # WOW A LOT OF RED FLAG I WAS RIGHT THANK YOU SO MUCH I WANT OTHER PPL TO KNOW ABOUT HIM.
REPORT N2 (added on February, 5, 2013)
Ann (Sweden)
I met Daniel on are you interested before christmas and he became very interested in me and wanted to come visit me a few weeks later, said he has a daughter named Jasmine 15 years old, i wanted him to show himself in webcam but he said he couldnt beacuse of security reasons, he said he was an special agent i Afganisthan. We began to plan his visit here and then he said he needed me to pay for half his flightticket but i said i couldnt, then he sent me chocolate for 100 dollars to my door with a note saying that he hoped that this would be a good beginning in our relationship, It all sounded very nice and i almost believed him but when i didnt payed for it he said we couldnt talk, after a month he sent me an email saying he miss talking with me.....and then i found his picture here so i believe he is a scamm.
REPORT N3 (added on May, 30, 2013)
Debra (USA)
He contacted me on girls date for free, came on very strong about he loved me. He asked
Me for my number called me had bad connection only whispered he loved me and said goodbye.
He told me he was a us decorated colonel best they ever had in aphganastan. He then
Told me he was retiring to start a life with, me. He wanted to send me money I refused.
He then waited awhile and told me he applied for retirement. He had a heart attack but could not
Tell me meds he was on. And stated he was not being sent to a hospital. He then told me he made
Me beneficiary of his pension. But I needed to send him a thousand dollars to pay for fees. When I started
To question him about this and reiterated back to him that he told me he was very wealthy. And collected many cars in his compound. I knew. He then got nasty with me. I reported him to yahoo and girls date for free.
I removed my profile, however I just found out he hacked my computer. I have pictures. And letters he sent me. I am sure he is using the same scenario and letters for all woman. This needs to stop, innocent woman are getting hurt, thank you.
REPORT N4 (added on May, 5, 2014)
Angie (Australia)
Met this guy on Zoosk. comes across as intilligent, sense of humor. Caiming to be in Kabul in Afghanistan.
REPORT N5 (added on September, 30, 2014)
Ella (Australia)
I do really wish to warn other women about him.
REPORT N6 (added on December, 24, 2014)
Carmen (USA)
He sent me an email. Met through TAGGED. Says he's in the Army goes by Sgt Gillum and is in West Africa for Peace Keeping mission. Says he's from Ohio and a widow of 4 yrs has a son 6 yrs old name Richard.
REPORT N7 (added on October, 29, 2015)
Angel (USA)
James Harper contacted me thru Seniormeet. He gave his phone no. And had been texting me. He claims to be from Morrisville, PA but is staying with cousin in Florida. Claims he lives near Lake Smyrna. This is where I detected he is a scammer. Smyrna is in Georgia, NOT, Florida. He invited me to chat via yahoo messenger. He claims wife died due to childbirth four years ago. Wife is 54 yrs old. Another sign that he is lying. A woman at age 54 is already menopause. He said he is not using a smart phone or landline. Claims his camera is damaged, thus, will not be able to send more photos. He even showed pictures of his claimed son. He claims he is originally from Palermo, Italy. After I told him that I have been traveling to Italy and asked if his Harper surname was Italian, he said yes, but all messaging stopped. He is all mixed up, that blew his cover. He claims to be in the gold business.

Romance scam letter(s) from Daniel Raymond to Ann (Sweden)
Hello Ann I sent you a message about 30 minutes on the number you sent to me on ayi. I will try to send you a message on this new number you just gave me.

Ann I appreciate your interest in making us work, I like you and I want to make this work too. I'm sorry you had a bad experience about internet dating but I want you to know that not everyone you meet online is a bad mad, I am not asking for your help babe don't get it wrong at all. I'm only asking you to contribute towards the ticket I will use to see you. Relationship is meant for 2 people and we both must work things out, if you know you want to come to Afghanistan to see me I can even book your flight without you paying a cent but I must warn you that it is not 100% safe. You need to make your decision I see you as a good woman and I would love to have a relationship with you, I know the internet is messed up but if we must have a relationship when we meet in person then the best time fo
Read more

Romance scam letter(s) from Daniel Raymond to Debra (USA)
I'm frank.If you're alone, I'll be your shadow. If you want to cry, I'll be your shoulder. If you want a hug, I'll be your pillow. If you need to be happy, I'll be your smile. , I'll just be me, I was recently honored with a promotion to Sergeant in the Wyoming Army National Guard. On March 31, 2010 I returned home from 18 month deployment with the 2-300th Field Artillery Battallion, in support of Operation afghanistan Freedom. I am from Casper, Wyoming, serving with the Fighting 197th Public Affairs Detachment. I completed the military school required to become a Public Affairs Specialist, on Fort George G. Meade, Maryland. During June, 2011 my unit was invited to travel to Brazil to cover a special forces competition. On top of serving in the National Guard, I am holding a full time job and going to school full time to get my degree in Engineering(B TECH). I would describe myself as stable in my career and goal-oriented. I enjoy making people laugh. I am intellige
Read more

Romance scam letter(s) from Daniel Raymond to Angel (USA)
Thank you so very much for taking your time to chat with me , I really appreciate the time invested in keeping this conversation. and I will be delighted to get to know you more better than this and see where us too....This are my recent pictures about couples of weeks ago before my camera got damage..

I really do not know where to start answering your question but I guess anywhere is a beginning , lol . A lot has happened to my family and I just do not know which to say because most are very complicated issue which might even scare you that you won't wanna know more about me anymore . I want to believe that is not gonna be true on your own part so I am giving this a trial by telling you all about myself which will answer your questions and even more that you ought to know if you really want to know me and hope that you do the same in return , be plain open minded to me and tell me all about yourself in general.

Where are you from? How old are you? what is you
Read more