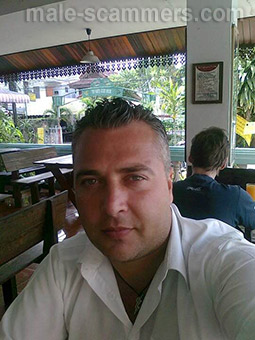 REPORT N1 (added on December, 5, 2017)
Ina (Australia)
Claims he's Dutch. Only child. Masters in Chem engineering. Worked as independent contractor for oil rigs. Came to sydney 6 years ago after his divorce. Engaging. Funny. Asked a lot of questions but mainly harmless - likes dislikes etc. Initial emails seem more polished. Did ask about my job and education. Claims to live at Bathurst St in Sydney. I travel to sydney for work so I'm quite familiar. Was quite cagey when I asked more. Asked to move to email straight off because his zoosk account was expiring. My profile did not have a photo btw. Initially seemed harmless but got into a but of lighthearted flirting even before seeing my photo. Suspicion 1. But ok. Benefit of the doubt. Said he was at oil rig after a week so asked to move to blackberry messaging to chat. Very short sentences. Difference in grammar noticeable but being European, again gave benefit of the doubt even though the dutch generally speak decent English. Suspicion 2. Gave name of oil rig but wrong operator. Suspicion 3 but ok maybe got mixed up. Benefit of the doubt. Finished job in australian rig then moved to job in Gulf of Mexico. Didn't give rig name this time but said he would visit after the job. A week after, gave story about chemicals being wrongly preserved by his US crew and its wasted. Chemical company won't send new chemicals unless he prepaid. Common practice. But then he said he used up his funds from previous job to set up for new job. Won't get paid by current operator unless he finished the job but can't finish without the chemicals. Ergo, he needed money And will reimburse once he gets paid. I said no. He sent me a long email which was very differnt in tone from previous emails. I copied the text and sure enough, it came up on Google. I blocked him but want to report. Some women may believe him as he is quite engaging and gave several photos of a really good looking guy. Don't seem to be professional photos but likely lifted off some poor guys profile. Where can I post the photos I got from him? So embarrassing. I consider myself fairly good looking and fit, well educated, good job but just got out of a marriage so also quite vulnerable but luckily intelligent enough to come to my senses.

Romance scam letter(s) from Richard Renterghem to Ina (Australia)
Hey Dear,
How are you?Can you confirm if you did receive this email?

Hey Dear,
How was your night?Still haven't told me your name?Excited to finally write you a detail email lol .
Here is a little more about me, I am originally dutch, I am an only child raised in Netherlands I still have family there (my mum and dad still lives there) so i get to visit often.
I came to Sydney after my divorce and decided to settle here. its has been a wonderful experience and a great part of my life.

I procured ROVs and fibre cables for transocean offshores,i supply it to offshore companies for there operation,get their quotation,source the equiptment,deliver and install if needed,my work are mostly offshore and onshore

Right now i am mature and i know exactly what i want in a woman whom i wish to come home to everyday and wake up next to every morning. Online looks like a great place and i am beginning to enjoy our conversation.

I have be
Read more