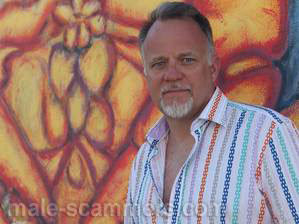 REPORT N1 (added on October, 25, 2017)
Eloha (USA)
Scammer who wanted to meet me on Tagged - image stolen.
REPORT N2 (added on February, 7, 2018)
Joyce (Canada)
Harold Wilson is now on Plenty Of Fish Dating site. His age he put 57 year old 6'2.
REPORT N3 (added on July, 3, 2018)
Erin (USA)
Says he works as a Engineer on Oil rigs but that he is also a Engineer. States he is from Spain (hence the accent). Said he is a widower with a daughter in boarding school in upstate NY. Also states he owns a company that ships equipment overseas. Said his equipment was being held in Turkey and that he was robbed as soon as he arrived with the cash to release his equipment and couldn''t I assist him in having his equipment released, Using photos of a legitimate businessman (Keith Rooker). He is tall, blond with striking blue eyes.
REPORT N4 (added on October, 9, 2018)
Cheryl (USA)
This man has been writing to me for months. Said hes originally from Germany.Started on fb then he wanted to chat on hangouts. He is in Gulf of Mexico for work. Oil Rigs, has 2 daughters in boarding school in Texas. Trisha is 16 and Tracy just turned 10. Got real serious, he is widowed. Says he has his own company, got a big contract, and the agency is going through a financial setback. He wanted me to be his beneficiary and pay 5300.00 to have the agency send his money over to me, and then he would come here to the states and wanted to get married. The company had 2 new profiled business moguls that bought a huge amt of shares. He said 60 %. So the organization has to pay 60% of the funds and then the remaining 40% will be paid 6 months after the conclusion of his contract. He wrote that the mode of payment of this 60% of his contractual income will be sent to me in s suitcase carrying a cashiers check of 1.5 million in the order of his name ad well as cash funds of $210,000.00. The suitcase would be technological with an opening code to open it and his name crested on the case But i would have to pay the 5300.00 to have it sent to me.. He sent me a copy of his oil rig contract the name of the company is B.P. Oil and Gas Drilling Company United State. Crude Oil contract period 15th April to 20th July 2018. Contract value 8500,000.00 USD Under contract No: BPO/GST/97538/X39A/2018. and it has his name and my name on it. Convrersations are always hello honey, hope you slept well honey,how are you doing baby. He got very angry when i wouldnt agree to pay the money. He said i didnt care about him, and that he was doing this for both of us. I have pics of him but after looking through this website... they are old ones. He said he will be done this month with his job there. I havent heard from him since I told him i wouldnt send the money.. because then he wanted me to get a credit card, so he could load my credit card. So when i refused that, he got very angry.When i asked him his age at the beginning... he said oh age is just a number. But he did say he was 65.He did call me a lot on hangouts.
REPORT N5 (added on October, 15, 2018)
Simone (Canada)
Scamming for money, romance scammer.
REPORT N6 (added on January, 28, 2019)
Laura (USA)
Met him on Eharmony 2 weeks ago, says he was part owner of Rockteck Construction Co.. when I met him he was in NY flying out to Belfast to finish a project. 2weeks later he says he's falling in love with me, a few days after that says he needs money to finish the project, his workers stopped working because he doesn't have money to pay them. He asked me for 10k, I told him don't have that kind of money, and all of sudden he's in the hospital with high blood pressure and is no longer the same sweet man, even the way he talks to me is different. Out of the hospital and he's still asking me for money, few days later he's back in, and upset with me because I wouldnt even get a loan to send him. While he was in the hospital he would never answer my phone calls thru Whatsapp.We skyped but he could never see me, but I could him. Says he is a widow, wife died 8 years ago of cancer, and had a daughter who died after a few days of giving birth, granddaughter is now 9 years old and lives in Belfast.
REPORT N7 (added on July, 24, 2020)
Sissy (USA)
Met him on Facebook dating. He moves slow, says he likes to take his time learning about you before meeting. I recognized his pictures on the site but couldn't remember where i saw them.
Says he works for the Department of Internal Affairs, Washington, DC as a training Supervisor both locally and internationally. Home (Denver, CO) for the pandemic but at some point said his associate came into town to work a case.
He asked me how I was supporting myself during the pandemic and I knew where that was going. Once I had the name of the real person in the pictures I broke off all communication. The real person in these photos is an author and mentor. Tons of pictures on facebook and I found all the ones I was given by this guy.

Romance scam letter(s) from Harold Wilson to Joyce (Canada)
My desire is to meet a beautiful, sensitive, sensuous, warm, assertive single woman who wants a friend my interpretation of a friend is one to whom you can pour out all the contents of your heart, chaff and grain together, knowing that the habitualness of hands will take it all, sift it, keep that which is worth keeping and, with a breath of kindness, blow the rest away i thank you in advance for allowing me to be that kind of friend to you..Am looking for a special, loving relationship with a unique woman who is affectionate, beautiful, with a shapely figure, sincere, easygoing, with interests and characteristics similar to mine...Someone who wants a meaningful, serious, long-term relationship...not just a few dates..Am looking for someone who has a great sense of humor and big heart, is curious about new things that would like to share new experiences or old habits..Am looking for someone who believes that a true intimate partner looks out for the other and vice a
Read more

Romance scam letter(s) from Harold Wilson to Laura (USA)
Oh my Darling, I think there was a misconception here. I feel something genuine and real for you. I appreciate all the love and effort you've put in for the progressive of our relationship. Am falling in love with you Laura. I want you to know I think of you every time. I miss you most time when I can hear your voice or chat with you. But I know for sure you there thinking about me. Please do not be worried. Am very positive everything will be fine. Am falling in love with you my Darling.

I want you to know we both involved in this relationship. I feel exactly the way you feel about me if not much more. I was glad we able to chat at today. I feel so much happy anytime am in touch with you. Even though we miles away from each other, I still think of you and couldn't stop thinking about everything we have both share. i just want to say thank you for coming to my life. I promise never to let you down. I will always cherish every moment with you. I will love and res
Read more

Romance scam letter(s) from Harold Wilson to Simone (Canada)
Hello pretty
I live in Jacksonville Florida but I am currently here in the Mediterranean sea in Paris France am on a short contract as an independent supervisor contractor engineer at the Shell for the drilling of oil and I will be back to the States soon.
Okay that's lovely, let's get to know more about out selves if you dont mind Ellie