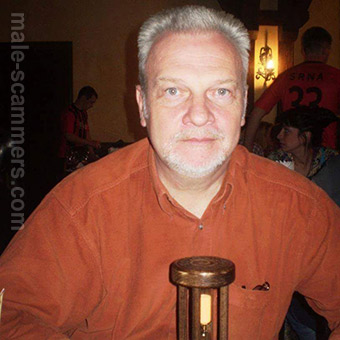 REPORT N1 (added on October, 25, 2017)
Linda (Norway)
Alexander Freeman, 69 years ,A son named Anthony 14 years old. Freeman is on an oil rig in Canada Exxon Mobil Corp Texas, crude oil drilling and purification, Hiberia Oil Field, Canada.
Asked me to give a birthdaygift for his son. He wanted an Apple lap top, he got this and money .Alexander told me he is a widower. After a few weeks he told me his son was hit by a car, and was in a hospital in Cape Town. His son lives with his uncle. Alexander was not able to pay for bloodtransfusion for his son, he had no access for Money on the rig. Asked me for money. A few weeks later he said the drillingmachine broke down, and ask for money. Then he asked for money to transport of the machine from China.. When the machine was repaired, he left the rig to pick up his son in Cape Town. From Cape Town he and his son was supposed to visit me. However, he got a housearrest in Cape Town, because he didnt pay the hospitalbill. He tells me he is still in Cape Town and he is not able to get out of the arrest before he has paid the hospitalbill. He is still asking me for money for food and phone.
REPORT N2 (added on November, 6, 2018)
John (USA)
He is trying to scam my mother. They met on E-Harmony and have yet to actually meet. Says he's on an oil rig working and waiting for a shipment from Turkey. Says his wife and son were killed in a car accident.