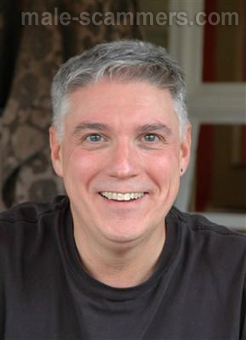 Romance scam letter(s) from Mark Hubert to Sheryl (USA)
Thank you for the mail baby.....I am so worried and disturbed my baby, i can't sleep my love.
I am here praying and hoping that God will lay something nice in your heart. Things are getting scary and unsafe for me here baby. Missing you so much and wish you are here with me or i am there with you or we are together anywhere....Kisses. Mark.

Trust me baby, if that's a way..I would i have jumped on it my love. If i tell you that's not a way just trust me okay?? Just try to see what you can do from your end, i am also trying here too my love. Something will workout for us, just keep thinking, okay baby??? I don't want to disturb your work so i will allow you continue with your day and hopefully before the day ends God would have placed a very good idea on my mind. Kisses baby.
Mark.

Thank you so much for the options and ideas my love....I am sorry that there are too many people around and you want to keep the privacy. About
Read more

Romance scam letter(s) from Mark Hubert to Sheila (USA)
Thank you for the mail you sent me shedding more lights on more about your self. Can you try to create an account with yahoo and download the yahoo messenger lets get to chat live and learn more about each other?? I will be expecting a mail from you soonest. Mark.

How are you doing and how was your night....Hope you had a lovely night rest and sweet dreams.
I haven't seen you online for some days now and the last time we chat, you said
Read more

Romance scam letter(s) from Mark Hubert to Cydne (USA)
Hello
Wow, you are such a lovely lady with a nice profile and i don't even know where to start and how to introduce my self to you.

Let me start by saying i love your profile and everything i have read about you on your profile.....My name is Mark, i was going through the matches sent to me by and i came across your profile,….I just had to send you a mail to say hello.

Hope you would not mind if we correspond and see how things works between us.Here is my personal mail……. markgilbert1955 at the famous aol dot com .Please Send a mail to my personal mail address telling me more about yourself, so we can get to know each other better because my subscription will be off in few days and i am not planing to renew.

I will be expecting a mail from you soonest.
Mark

How are you doing? Thanks for the email you sent me…My son is 11years old and living in Paris, France with my mom, he studies there and only comes to the states to visit me on ho
Read more