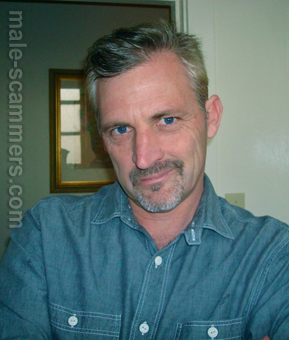 REPORT N1 (added on September, 25, 2012)
Grace (USA)
I would like to report a male scammer. Please see all of the attachments I have submitted. I have included emails, instant messages, photographs and western union receipts for sender and receiver. He notified me through SpeedDate.com. He stated his name is Mark Johnson, 54 years old and is from San Diego, California. He currently is in Russia working as a Geologist, since March 8, 2012. He stated his wife Judy died in 2009 and he has an 8 year old daughter Cheryl. He notified me first on June 18, 2012, I told him he lived to far and was not interested. I live in Texas. He then contacted me again on July 3, 2012, and we started a conversation. Up to this date August 19, 2012, I am still in contact with him. He does not know that I know he conned and scammed me. I am playing his game. He had me hook, line and sinker. I am an educated, professional female who is divorced. I work for the Federal Bureau of Prisons, he was/is aware of my profession. I believe I have been conned and scammed by the best. I supervise inmates every day and they have more respect than this guy. After talking every day for the last month and a half and sometimes 2-3 times a day. He was to finish mining his plot/acre in Russia by August 16, 2012.
On August 11, 2012, he calls me and we chat on instant message (IM) that is how we did most of our communicating. I have every conversation saved and have also attached some of those conversations. He informs me that he has been asked to pay an additional 62 thousand dollars for government tax. He has notified his nanny and her husband in the States and had come up with most of the tax, which equaled 18 thousand dollars. He stated his nanny was able to send him 9 thousand dollars and still needed 9 thousand more. Of course he was held at the airport and not able to leave Russia until this was paid along with his shipping of gemstones that were mined. (I have also attached a copy of the shipping invoice that he sent me). After selling his watch, ring and a gold chain he now needed $7800 dollars.
On August 13, 2012, during our conversation he talked about ending his life. I’m thinking of his daughter not having her father. He stated they would arrest him and charge him with illegal mining. I don’t know nothing about mining and a geologist profession. So I didn’t know what he was telling me lies.
On August 15, 2012, I even stated in our conversation, “I hope I’m not wrong”. I sent him $7400.00 per Western union. I knew after I got back home I should have never sent that money. It was too late.
On August 16, 2012, I reminded him of an earlier conversation that I had been scammed for $500.00. Of course he has pledged to pay back with interest. Since he received this money, it has been one excuse after another why he has not arrived back into the States. I know he received the money sent to Russia. So he has to be living there. I also had my cell phone added for international calls from Russia.
Around July 13, 2012, he sent me $1500.00 to buy him a Apple laptop computer and ship to Russia. I have 2 addresses for Russia along with 2 other names. He stated this address is his site supervisor: Alvin Dicson, Prospect Bolshevikov, 65 block, 3 flat 4, St. Petersburg, Russia, 193315. Then on August 1, 2012, I was also sent another $1520.00 to purchase another Apple laptop. He stated he was robbed at gun point after picking up the first laptop. I have attached all receipts to confirm what I am reporting. Other address is : Prospect Bolshevikov, 61 block 3 flat 3, St. Petersburg, Russia 193315. Phone numbers: 011-79112656876-this number he states he lost the phone in a taxi. New number: 01179117579526, this is his current number he is using. I have 2 email accounts: markjohnson_05@yahoo.com, deydey06@yahoo.com.
I have also another name that was on the airline ticket: Blair Gibson, so a total of 3 different men’s names.
I want to do everything possible to stop these men. I understand I will not get my money back, but if I can stop another female from going through my current situation, I will do anything.
Thank you for your time and please advise me what else I can do.
Sincerely

Romance scam letter(s) from Mark Johnson to Grace (USA)
Grace
I have been trying to look through profiles on here to me its just not working but the moment i saw your smile and the sexy sparkling eyes of your's,then i understood there is more that i need to know about this Angel that i cant just get my eyes off...i read through your profile four times before i could hit a keyboard and flirt you on speeddate.com and found your email and to write you and tell you what impression your profile and picture made on me,my name is Mark and i'm a Simple man in search of a happy,simple and positive partner.i have a daughter and i love pet as well.i will be so very glad to read back from you,Tell me what are the qualities you desire in your ideal man??..............from a caring heart..
Mark

My Darling
How glad i am to read from you Dear,how are you doing today and how is the weather there,hope everything is alright with you.I read your email and i am filled with joy that you are honest and share everything
Read more