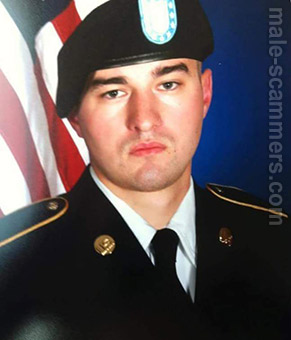 REPORT N1 (added on July, 28, 2017)
Jade (USA)
Marine/military scammer.
I made him communicate with me via a gmail account I created just for us. Said we can exchange new bank passwords over the email drafts and not send to anyone as my previous bank (the one that closed because of him) password was supposedly breached on Skype. Google has stellar security protocols and I saw that when he logged in, it was in Nigeria, not Turkey like he said he was in. I'll be looking up the IP address on your site once I get access. When I told him of this, he said gmail is not secure and wanted to stop communicating on it. Not one log in hit came from turkey.
There were many red flags I chose to ignore, including the fact that I knew the Germans were pulling out of Incirlik months before it happened and he had no clue. I also tried to talk about major happenings in the Middle East like US soldiers being killed in Afghan and even used the military code blue on green and I can tell he had no idea what I was talking about.
I don't have the chats that state he asked me for money as we've been deleting as we go so as to keep it from his superiors.
I also wanted to add that he says he is British but his accent sounds like a hodgepodge of British, Irish and Aussie. And that he moved to the New England (US) area when he was a child. His Facebook says LA, CA and his now deleted Clover said San Jose, Ca
I will be reporting this to the US Marine Criminal Investigation Division. All military branches have one.
I'm sure this goes without saying, but please do not include my name, address or other private info when you upload these images.
Thanks again for your site!
REPORT N2 (added on October, 12, 2018)
Bel (USA)
This cold hearted human took everything from me. He's a charmer, and knows how to win even the smartest women over with his lies. Don't fall for it! He's evil!