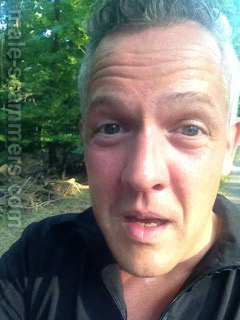 REPORT N1 (added on June, 20, 2017)
Louise (USA)
New African scammer.
REPORT N2 (added on September, 4, 2018)
Roberta (USA)
He texted me on POF 2 weeks ago.
I wasn't going to reply because the same first name is a huge RED flag. Then he said oh, I live in AG, a city right next to mine. Longbeach wasn't that far, because he said he lived there. I was confused about that. I wondered why he only replied during the night. Why we never talked on the phone.
Then 10 days later he says he has to go to Kent, England for Vanguard. He has been doing feasibility studies. Said he won this huge account with lawyers from Dubai.Then he had to go to Dubai, then back to England, then to visit his mom in France. Then his mom died. He was running out of money. He never asked me for any yet!!. He had to bury his MUM, as he put it. The I put his photos back into Tineye, then google search and I got a hit. Some radio personality in the Netherlands. I found all the photos there.

I'm glad to read your email ,Thanks so much. I want to provide you with more knowledge about me so that we don't find it hard to break the stillness of a normal greeting and what to say to each other when first we meet.

I have French accent. I was born in Lyon, France but came back to the US with my parents at the age of 6. My family have always lived in Fresno California until my mom moved back to France after we lost dad , my wife and Son. I moved out of Fresno because it was lonely for me and the memories it brings to me of my family and my loved but lost ones. I lost my dad and my son in a car pile up on the Pacific Coast Highway, Anyway, let me not bore you with things that I don’t wish to remember. I live here in Anchorage AK, I grew up with so much love from my mom .I must say she loves me more than her husband .I was spoiled with her love until I got married. I was married to my late wife Angela Edward for 31 years ,I have a daughter Dian
Read more

Romance scam letter(s) from Matthew Edward to Roberta (USA)
My Dearest One,

How are you today. I could not email you again yesterday because I needed a place to cry when I couldn't get a flight to France yesterday. I got to France this morning. I left London with the 7.45am flight and was in the hospital early enough. I have seen her body at the mortuary; yes she is truly dead. I was hoping that it will turn out to be a joke or a lie but I was the person lying to myself. The big problem now is that her only sister who has been with her all this while is now in coma. Her sister died in her arms and she could not bear it. She could not bear losing her only sister. It is just too complicated for me at this moment. I just realized the disadvantage of being the only child. I can’t even think straight now. I have my aunt in the hospital with the corpse in the mortuary. The world just hit me so strong when everything was about moving well for me. My love life became rejuvenated and all of a sudden all seem to be crumbling at the
Read more