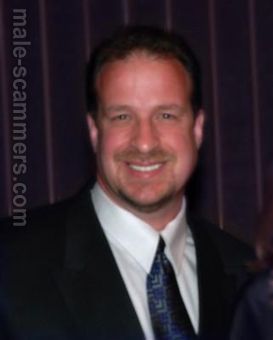 REPORT N1 (added on September, 20, 2012)
T. C. (USA)
He pretends like he lives in UK and on business in Cape Town. He said he lives in Manchester. He lures females who are looking for life partner and asks for money later by creating fony emergency. All he is after is money.
REPORT N2 (added on July, 31, 2013)
Mary (USA)
Nate Mulligan initiated contact with me on Match on June 14, 2013. He informed me his subscription was ending and not going to renew and to email him at nmulli53@aol.com. We emailed for a week before he returned home to Manchester, UK. He was divorced with custody of his 12 year old daughter Francesca, which he has a nanny that takes care of her while he is away on his contracts. He was home for a week before he received two contracts, which has never happened before, I brought him good fortune.The contracts were for South Africa and Asia. He chose to go with the contract for Cape Town, South Africa which was for 5 weeks to install crude oil pipeline and take down an old railway station and rebuild one, so he could finish sooner and come see me. While on there way to Cape Town, his daughter left a backpack at one of the airports, in which was stolen with their cell phones, IPad, daughter's laptop, camera and wrist watch. Upon arriving in Cape Town he requested a cell phone from someone and got the Internet up and running so that we could communicate. Upon the 5th day in Cape Town, an accident occurred involving a Mega Built Crane in which he was operating and other workers were injured and taken to the hospital. He called all upset and crying with a head injury and a scan showed that he was not seriously hurt, just a bandage wrapped around his head and released. One worker received a broken leg. The good news was that he was not going to be sued by the families and the media was not going to be involved. He let me talk to his daughter on the phone the day of the accident, Thursday, July 11, 2013.. He knew that I was already once scammed for money, so he could not ask me for help. Within five days of the accident, he asked me to take out a loan for $19,000 to help him get back on track and was angry and accused me of lying when I told him no, I don't have the resources to take a loan out or to cash out a 401K. He stated that he was able to contact his nanny and she was going to send him $21,000, but still needed $19,000 so he could get back to work and complete his job. He then texted me to stop calling him and to let him figure this out on his own and to forget about him. This was July 16, 2013.

Romance scam letter(s) from Ruben Maximus Kellermann to Mary (USA)
I'm very active, easy going person, like dance, sports, nature, etc. Also, I like very much to travel.
I am a very patient man who is respectful of the needs and wants of other people. I am supportive of others even if it's not what I really want. Iim always willing to help those whom I consider my friends. I enjoy at helping my friends reach their goals. I am very loyal to those around me especially when it involves my personal relationships.

Thanks for writing back to me as I'm glad reading from you, receiving your email did warm my heart. How's match been treating you? This is my first time with this online thing and am getting lots of messages from some not quite nice ladies here. The matches been sent to me just want to meet at a bar and have fun, am not into the fling thing, i'm seeking a serious relationship. I am creative and artistic, sensitive with a good sense of humor, quick witted friendly , energetic, do my best to ho
Read more