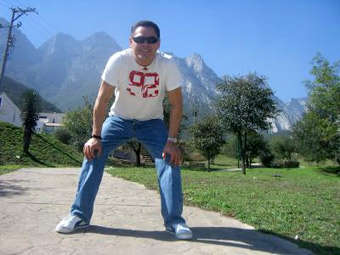 REPORT N1 (added on August, 9, 2011)
Tina (USA)
My story starts with the loss of my Father he passed away in our house while my Mother and I were at the hospital seeing my boyfriend who was in the ICU unit. We returned home to find my Father had passed away in our bathroom of a massive heart attack. (I am a nurse)Needless to say less than a month and a half my boyfriend passed away also. He had been diagnosed with a genetic brain disease that his Mother had passed away with in 2001 also. He was diagnosed in 2004 via voice mail get you which totally ended his life that day on Christmas eve as harsh as this sounds, but he totally give up that evening. The disease which only as rare as it was has only 50 confirmed cases in the US has no cure or medications for it. We didn't ever expect him to pass this quickly as life expectancy is age 60 to 65 and he was only 48. He passed of a brain hemmorhage on September 2nd at 4am. We would have been together 9 years on January 7th of this year. To say my life has changed is an understatement! That leads us up to the scammer and how I met this person. I was feeling really low and where I work I live in Columbus, Ohio. I was told to sign up on Eharmony so I did on September 14, which was my Father's birthday. I got a really nice email and thought this sounded like a really nice person and not too far away just Cleveland and just and hour and a half away. I started communicating and everything was going great. He told me his Father was deceased and had left a marble and ceramic store that he had to go and stock. He was going to be gone for about a month. I didn't think about it at the time to ask him where the store was located at, I don't know why I just didn't. He told me the flight would take 26 hours and he would not be able to contact me during this time. I told him I did understand this. Upon his arrival he did contact me. After a couple days the ship with his stock did arrive and he did contact with bad news he had forgotten his credit card and needed me to wire him $5,000 to be able to get the stock off of the ship. So I did wire the money to him. I felt confident doing this. He then told me where he was at Lagos, Nigeria. He told me this was the first time he had been there and he hated it there. He asked me if it was okay he stay there and sell the store so he would never have to go back there. I told him yes, that was fine with me. Needless to say, he sold the store in a matter of weeks. He sold it for $700,000. So I felt confident in advancing money I knew I would get it back so no problem. He told me he needed money to pay his hotel bill and get money for airline ticket this was $3,000. On the day he was due to fly into Columbus to meet me he did not show up. I emailed him and it took him two days to get in touch with me, by this time I was really livid with him. He then proceeded to tell me that on his way to the airport he hit a 4 year old boy and the child was in the hospital with massive head injuries. Needless to say, the child passed away 6 days later. Now he had to hire a lawyer this was going to cost $5,500. He then had to go to court three weeks later. He went to court three times. His verdict ending up being to pay the family $25,000 or two years in jail this had to be done in two weeks time which was up at midnight on 12/24. I hate to say that he is now in jail so he says.

Romance scam letter(s) from Brian Norman to Tina (USA)
Hello
I appreciate your time and effort for getting back to me. I hope this would continue with time we would know each other better.Sorry for all the Loss that u have face this years. My name is Norman Brian I'm 40yrs, I live in Cleveland city in Ohio, I'm originally from Mexico....My Dad came to the state when he was just 21yrs that was when he saw my mom, they both get Married to each other and had a very good family and enjoy life together.I am a Divorce man with one daughter,her name is Sandra,she lives with my mom in Mexico but am very sorry cause i fill my profile with single on the Site,i don't know how u will take this but i want u to please forgive me....I'm an easy going kind of person, caring, loving and God fearing, I'm 5'7 tall, 168lbs with brown lovely set of eyes,I work as a Building contractor and i also inherit my late dad store in some part in Africa,It's a store of Ceramics and marb
Read more