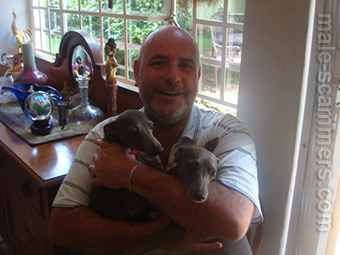 REPORT N1 (added on May, 15, 2017)
Kinga (Poland)
Man called : NICO GAMANI met me on the website called : twoo. He was the person who initiated the contact with me. It is hard to believe but i am in a constant contact with NICO GAMANI till now , i mean till May 2017. This man was a perfect lier and i couldn't see any strange events that occurred that would make me suspect him to be a scammer so I was quiet sure that he tells me the truth about himself and about his child. When he met me , he told me that he is in Aleppo, Syria , and he works as a reporter for the Red Cross International , he is a widower with 7 years old daughter called Vera and that he lives in Cork , Ireland. He has started to ask me for the money since August 2014 till November 2016. He asked me for the money for his medicines and clothes , for his parcel (from India to Poland , but his parcel stuck in customs in Bangalore) , for his child ( he told me that his daughter went for school excursion to Kenya and she felt sick ) , for his needs in the hospital in Bangalore and for bringing him home. He wanted me to send the money trough the Western Union Money Transfer and trough Moneygram. There were many people who were the receivers of the money , but : Mr. EMMANUEL OLELE and Mr. OLELE SYLVESTER OSE were the main persons who received the money from me. I lost a lot of thousands of US dollars. Because i was helping him financially from the August 2014 till November 2016 so i don't remember how many times did he ask me for the money. But i can only say that he asked me many , many , many times for the money. Since the day i have founded out that he is a scammer , i have changed my thinking about this guy. I am still in a contact with him and he thinks that he can play with me in his game as long as he wants but i know who he is and i will not give him any chance to cheat me again.

IT BREAKS MY MIND THAT AFTER 2 YEARS AND 8 MONTHS WE ARE FINALLY GOING TO BREAK UP? ALL I SEE THE WORK OF THE DEVIL.

WELL GOD IN HEAVEN KNOWS BEST IN OUR LIFE AND FUTURE. MY DREAM WAS TO TAKE GOOD CARE OF YOU AND VERA, BUT ONLY GOD KNOWS AND HAVE THE ANSWER.

I WONT FORCE YOU TO ACCEPT ME BACK, IT SEEMS YOU HAVE ALREADY DECIDED TO END THIS RELATIONSHIP BECAUSE YOUR LAST WHATSAPP MESSAGE TODAY SAYS IT ALL.

SEND ME THE INFORMATION YOU NEEDED TO RECEIVE THE 15 EUROS YOU MENTIONED IN YOUR MESSAGE.

I AM SENDING YOU THIS MAIL TO INFORM YOU THAT MY MOBILE WAS STOLEN THIS MORNING AFTER READING YOUR MESSAGE AND I KEPT THE PHONE IN CHARGER, COMING BACK FROM THE BATHROOM, THE PHONE WAS MISSING. I REPORTED TO THE HOSPITAL AUTHORITIES, THEY REFUSE TO ACT OR TAKE ACTION BECAUSE OF MY PENDING BILLS.

IF YOU WANT TO REACH ME FOR NOW, YOU CAN SEND ME AN EMAIL.

I AM OUT OF MOBILE FOR NOW.

TAKE CARE AND GOD BLESS YOU AS YOU HAVE DECIDED TO MOVE ON.