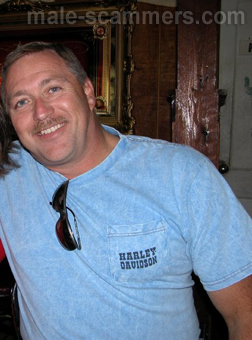 REPORT N1 (added on September, 17, 2012)
Brenda (USA)
Met him online approximately two weeks ago. We exchanged emails and then messenger contact information. He stated that he was a Civil Engineer who resided in Seattle. Witin a week he informed me that he had been awarded a contract and had to travel to Ghana. He contacted me two days later stating he had arrived there safely but left his small luggage behind that contained his money and cell phone. He stated that he would be meeting with his client to sign off on the contract and hopefully receive a check at that time. He stated that he had initially purchased a one-way ticket to get there as he was planning to come and visit me when returning back to the states. He stated that after meeting with his client he received a check for $750,000 but needed $3,000 to open an account there and deposit the check. He stated that his credit card was declined in Ghana and that he needed help with the $3,000 to open the account and pay to a picket back to the states. When I advised that he contact his family to wire the funds needed he stated that both his daughter and mother were out of the country and he did not have teir numbers to contact them. That''s when he started asking for money, repeatedly and continually. When I told him cintinually and repeatedly that I had no money to help him he called me stupid to call him a scammer, wicked, and selfish. Before asking me for money he emailed me daily and we talked with each other daily via the messenger. Now if he contacts me it only leads back to him aslking for money again. When I stated I had no money to give him once again he stated that he knew I could get the money some way and that I just refused to help him.

Romance scam letter(s) from Dennis Houston to Brenda (USA)
hello and good morning to you my sweet Brenda....how are you doing today ? guess great huh anyway i am very cool and want you to know that i enjoyed reading you mail and all you said is true and our correspondences tells me we do share a lot in common and when enough attention is given..something better might result.You have a lot of passion in your soul, I can tell by the way you write. It's wonderful. You sound very passionate, considerate and sweet..I like to think of the world as a big treasure map. The treasure can be found anywhere. That is how I view life. There just aren't that many people who know how to find the treasure. Life can be enjoyed in so many ways. Friends, traveling, culture, volunteer work are all links to the "treasure" of life.
I am generally an optimistic person with a great sense of humor, fairly easy-going, and I don't think that I'm too critical about things, but I also believe that it takes two people contributing to a relationship to m
Read more