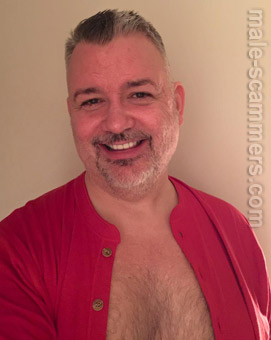 REPORT N1 (added on May, 4, 2017)
Natascha (USA)
On february 7th this man contacted me by Facebook during a frienship request. I talked with him every day until two weeks ago. He told me that he was widowed and has one son of 14 years old which lives in Houton Texas on a boardingschool. He works in norway as a drillingengineer for prosafe on a rig for three months in a row with afterwards one month off duty. He is very friendly and told me he fell in love when he saw my picture and after three weeks he wanted to marry me, sending me copied loveletters of the web etc etc. Suddenly he mentioned some personal problems according to his son, he had to go on a fieldtrip with school to Rio Brasil. The man forgot to budget this before leaving for work and some personal friends of him couldnt help him because they had problems of their own. He never asked directly for the money but mentioned every now and than this problem. Than he was offline for a couple off days without noticing me and afterwards he told this was because of the problems with the money for his son. He had thought about asking me for assistence he told me since he was in the middle of nowhere and couldnt send the money using moneygram. I told him that i couldnt help him with money but could assist him transferring the money from his own bankaccount. Than i did some research with new photo's of him and found out that this man was also named earnest wayne smith and had several accounts on fecabook using this name. I confronted him with this and never heard of him again.
REPORT N2 (added on June, 15, 2018)
Kathryn (Australia)
Requested friend request on Facebook. Has a Facebook profile Mark Williams...very affectionate and charming. Said he loved me instantly. Lays it on thick with lovey dovey stuff. Takes his time in buttering you up. Sends many random photos additional to posted photoes. Very attentive always. Very polished performance.