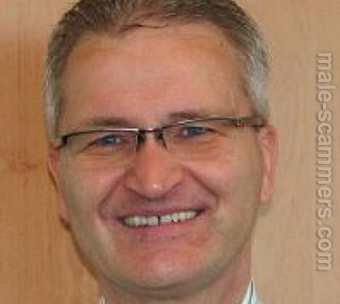 REPORT N1 (added on April, 10, 2017)
Wilma (Canada)
We meet on first met dating site. We got acquainted, well . He is on import/ export of precious minerals. He went to Yukon, old crow area to panned for gold. After few days, he said computer feel and got distroyed, and he needs another one. I didn't trust him in the first place but then he gave me a site where he is registered and phone number to verify who he is but never contacted the person. He beg for my help.. He asked me to send money to his friend named Kayla in Kansas to buy computer and program to suit the job he needs.to be shipped to her in old crow. Again he run out of chemical to test gold and ask again that he promise to reimburse me after gold is ship to buyer. After harvesting gold and ready to ship, he run into problem at custom at old crow that the load is overweight, he has to pay 23000 inorder to transport gold to whitehoarse on to Alaska where it will be stored. Because it didn't go thru costume in white horse, his liscence is only for good in the US that he cannot sell his product it in Canada. So he found bullion company to store the gold which he will 30000 he ask me again as he is short of three. But instead of waiting for the the money I wired thru messanger base in Nevada, Bram and his foreman went thru short cut and got caught at delta junction in fair bank where he was detained for a week, foreman was release. He give bribe to highway patrol, gave them three bars of gold and ten thousand, is because it is impossible for him to acces mone he ask again my help to wire 7 thru chase bank, messengers acct. named Christine hart. His phone was spoofed by police.
Because of the delay of pick up he has to pay extra 4, he said he burried the gold in the bushes inorder for him to go find some money. Is because he didn't have luck, he beg me to help him out. Gold was pick up, run again into problem with health. Got hospitalized had surgery, got infection need powerful anti biotic if not he will die. I send money to the same messanger which they brought the money to hospital,he promise to reimburse all monies owed once he get that payment and bank cleared at his escor account. I got hold of one person he scammed with different picture he uses to what he provided me.