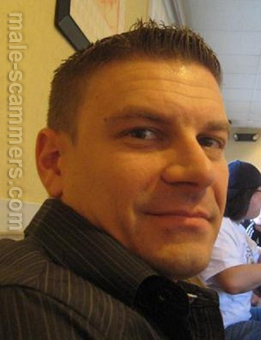 Romance scam letter(s) from Bradley Nolan to Jan (England)
Hello Honey,
Thank you so much for the wonderful emails,e-card and the pictures. I was almost crying when I went to youtube and see those words . You are so wonderful and I just wish I have the perfect words to describe you Honey. So sorry that I have not been able to chat with you often or write you extensively in a while, work has been so busy and there is so much to attend to. Chatting with you was fun even though it was short the last time and I enjoyed every bit of it. I know we both have stuff that keep us busy but creating time for each other goes a long way to show that we care and want the best for this relationship. Your presence in my life bring so much sunshine and happiness. Life is so unpredictable. Changes always come along, in big or small ways. I dont know what happened that this sudden change has turned my world upside down. I don't know exactly what it is, it just hit me, but there is something really special about you Jan.
It might be all the
Read more

Your request has been processed and verified by our Leave Request Department. We are glad to tell you that Sgt. George Bradshaw would be granted leave. But first, there are some process that has to be taken before he could leave the NATO base.

A Money Back Guarantee form will be sent to you which you will have to fill and send back to us.

You are to pay a refundable amount of Two hundred Euros (200.00 Eur) as Leave request processing charges.

All payment should be remitted via Western Union and the payment MTCN number should be Emailed to us as soon as possible to hasten confirmation.

Below is one of our Agents details where funds has to be sent:

Note : Your money is refundable and will be sent back to you as soon as Sgt. George Bradshaw gets to you in Modena, Italy.

Romance scam letter(s) from Bradley Nolan to Janet (Netherlands)
Hello Pretty, I thought it would be nice when I put this information together, so you can read more about me better. My real name is William. I'm 43 years old. I'm single dad with a daughter ....my daughter is 16years old,studying computer science in university, I've been single for only 4 years and am tired of the usual, A friend of mine says I should try online dating, because it worked for him, so he thinks it might work for me, that's why I'm on the dating site
I'm half aussie half Dutch I lived in Australia most of my life, but after I lost my wife I had to redeployed back in the Netherlands so I can get closer to some of my relatives.
I work as internal affairs officer Ministry of Defense Royal Netherlands Air Force (KLU)Woensdrecht,but since I'm single and my colleagues are almost all married and have children.So am now only ......i too want to settle down with a honest woman,i want to have respect at my work,because they always give respect to a married ma
Read more

Good morning and how was your night .. I'm just dropping in to know how your day is and I hope you have a wonderful day! May your morning be sunny side up, your Morning bright too....May the whole day bring good news to you and may i too be good and want to tell you that if you were just to give me one chance, I could show you that it could be amazing. I don't want to hurt you like you have been hurt in the past. I just want you to take a risk and see how good it would feel.....I know that things could never be the same again but that's what life is about...
taking risks! I could make you so happy. There's more to life than just sitting around waiting for something to happen and don't know life will then just pass us by i just want you to lets start from here and lets see where it will lead us to...and i know it will lead us to good and we will both be happy..and have live in good life and want you to know that all you told me about you i know You
Read more

Romance scam letter(s) from Bradley Nolan to Teri (USA)
Just thiught i'd email to let you know i enjoyed our chat and look forward to getting to know you more and better. I hope i got your email address right. Let me know if i did.

Good morning to you Teri, I hope you slept well? it's nice to check and see your email. I just finished with some paper work and thought i'll send you a quick email telling you abit about me.
Ok, here we go; I'm a Private Consultant, analyst with the Federal Government. I have worked my way up the corporate ladder with the Government for the past 18 years. Have traveled quite abit for my job. Now it has actually slowed down some and I've only been on a few trips. Tell me what was your favorite toy as a kid? what did you wish to be when you grow up? Tell me more about what you do now?
I would like to meet someone who is going to like me for who i am, not something I'm not. Be honest about who you are, what you like and look like and be proud of it, no one is perfect (mys
Read more

Thanks so much for getting in touch with me and I cherished you, You are appreciated and I am hoping we have started from somewhere and with time we will get to know each other better. Here are just little about me as promised, have it safe in your email box.

To tell you more about me, I would not have divorced but after several years of lovely activities with wife, things started changing negatively, she started having an ex marital affairs sleeping with men around. After begging her several times to stop the bad character, she will not stop and I asked her to move on with her life and we both file a divorce. To my surprise, she did not even have any feeling for our kids and I took up to the task and take good care of my kids. I heard she is still going all about sleeping with men. I tried not to divorce but she will not change so I divorced to let her go out of my life and the kids forever.

To tell you about my job,I may only tell you few for
Read more

Romance scam letter(s) from Bradley Nolan to Eloha (USA)
How are you doing today
Oh yes, pardon me for contacting you at work time. I just want to message you at eery opportunity I have knowing that you will read it whenever you are free. I want to know you more better and I am also ready to tell you everything about me.
Oh that is good to know you are having a lovely visitor. A good way to enjoy the weekend. I will love to tell you everything about me and Can't wait to know you more. Let me know when you do come online so we can talk better and if you are on yahoo messenger, you can add me on my id which is; markcrowdermark
oh ok. So what email do you have?
Its ok, I so much respect your opinion. Thanks for getting in touch

Hey, I know that you probably get hit on a lot by random guys, but I still hope that you read this message. I was just looking for a friend when I saw your pictures. You have a really inviting smile. I don’t want to be creepy, but somehow I just had to write this message. I w
Read more