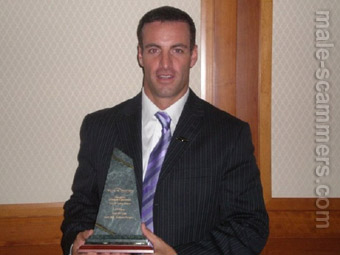 REPORT N1 (added on March, 6, 2017)
Gia (Venezuela)
He claims he is from the states, born and raised in utah but living in Ohio.....he said he is divorced with 3 kids named Jeffery David and Vicky.....he said he is a medical doctor serving in Germany at Alpha Hospital (I search for it on the web and no Alpha Hospital in Germany at all, first sign!) ..he told me he had a pacient (heir of Walmart Stores worldwide) who was dying and wanted to give us (he and I) a huge amount of money for charity ($850.000) and that I had to contact a woman from a courier (i searched for it on the web also and it doesnt have a PHONE NUMBER) I could only contact her by email..??©©....thing is that this dying woman named Grace W. sent me an email (fake i thought) telling me that the box containing that amount of money would be sent to me by SHIP !!! And that I had to give the woman in charge of the courier company my adress, my phone number, and a picture of me in order to deliver the package!!!
DID THEY (IF THEY EXISTED) OR HE REALLY THOUGHT I WAS SO DUMB !!!????
HE IS VERY GOOD IN THIS....OH AND THEN HE MADE A HUGE MISTAKE SENDING ME A PICTURE WITH A LAPTOP THAT SHOWED A PAGE ON IT....AND I SEARCHED FOR THAT PAGE AND THE RESULT COME TO MY SIGHT !!! THE OWNER OF THE PICTURES IS ANOTHER PERSON, OWNER OF THE WEBSITE SHOWN ON THE LAPTOP !!!...THE REAL OWNER OF THE PICTURES IS SOMEONE NAMED ANDREW CASS, HAPPILY MARRIED, 43, 2KIDS....