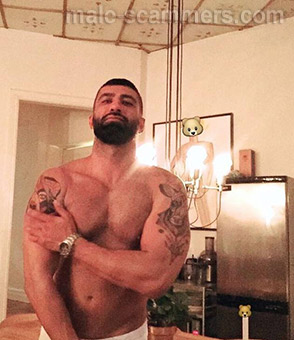 REPORT N1 (added on January, 5, 2017)
Lynn (USA)
I received a message on OKCupid initially, then deleted that account as soon as I shared email & phone. Then corresponded by text, email and over the phone. He claimed to be of Italian decent, attended college in Canada, and a widower of an Italian model; said he was an engineer working for international oil companies; recently moved from Nashville, TN to Ft. Wayne, IN to avoid memories of his deceased wife. Within a few days after we began communicating, he had to cancel our first meeting for a business trip to NY, which then took him to Dubai to work on the biggest project of his life. He worked there for about a month, then stated that the company couldn't pay him until he paid the government levy of about $33,000. He said he was short $3,000 and had to pawn his rollex watch that his deceased wife had given him. He never asked me directly for money, but did everything in his power to get me to offer it, including telling me he was chosen for a project that would be worth $39 million, and his cut would be 25%, if he could only raise the additional $3,000, then $2,000 which he claimed to have one week to raise. Several weeks went by and he became angry with me for being "selfish". Each morning he would send long romantic emails & texts professing his love for me and desire to spend the rest of his life with me. Apparently, his phone, which always appeared that calls originated from Tennessee, was obtained through Enflick, which can be set up with any origination chosen.

Romance scam letter(s) from Frank Licata to Lynn (USA)
My name is Frank Licata.I was born to a loving couple, a home, by an Irish American man from the Rhode Island area of New England, and a Italian Mother from Rome. My father was an international business man who met this Italian orphan whose family was close friends. She says there was something about the man that no woman could ever resist. Sometimes she says she sees same in me, lol.Due to the nature of my father's job he traveled a lot and that made me spend most time growing up with my mum in Italy (that is how I got my accent). After high schoolin Italy on the Italian soil, I left to study in University of Lethridge, Alberta in Canada where I got the first degree in electrical Engineering and, before I finished college my father and mother were already settled together in Rhode Island.Then i later moved on to join them in the Rhode Island. My father died and she was left alone. I met my deceased wife and best friend in Venice, Italy at a fashion show, she was a
Read more