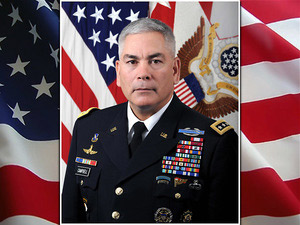 REPORT N1 (added on November, 19, 2015)
Nadine (USA)
He keeps askkng me to send money to people so they can deliver money to me. It has not happened yet so I naturally think he is a scammer. He calls you his wife and tells you to do this or do that....and he expects you to do everything helt tellse you......He makes you open up bank accounts so he can transfer money to you but he never does. I have been involved with him for over a month now and nothing ever comes of what he says he is going to do.
REPORT N2 (added on October, 17, 2016)
Eloha (USA)
Military scammer. Image stolen.
His message to me:
"hello how are you doing what is your name and where are you from."
REPORT N3 (added on September, 5, 2018)
Dobby (USA)
After thinking I had blocked all accounts I could find on Twitter for General John F. Campbell (because of Terry Nehem Williams and his skill as posing as this man), I simply followed this account instead of blocking. I know already that it's stolen identity because the real General Campbell's username on Twitter is @campbelljfr1. This imposter said he was in Kabul, Afghanistan, on a peacekeeping mission with the United Nations. He has one son named Sam, in DC. This Gen. Campbell's wife died four years ago of breast cancer. Campbell asked me to send him my picture, but I asked him to talk to me before doing so. (As a writer, I wanted to critique his speech pattern, vocabulary, and responses. I was taught to do that in high school by my English teachers, while watching the news, reading, or listening to people speak.) As our conversations continued, I was struck by how closely he resembled General Richard Cody, already written up on this site for an attempted scam, for the same thing. After I determined that he was not one of the Terry Williams accounts, I sent this Campbell the same name and photo I had sent Cody. I did not hear from him for several days. When he did return, he discussed afterlife, among other things. He told me he loved me, and we chatted along until today, when he said that his phone needed updating, that it was directing him to the Apple store. We discussed iPhones, about which I know virtually nothing as I use a computer. I told him that I'd just opened a new checking account with $3,000 that had been paid me by people who owed me; and as soon as I received the debit card, I was going to pay off what I owed on the new tower I'd had to buy. He asked if I could help him get an Apple card, that he could not get one there where he's located - an iTunes card. I assured him that as soon as I received the debit card, I would see about getting him one.

Romance scam letter(s) from John F. Campbell to Eloha (USA)
Hello! You are very beautiful with a great smile, I want to meet you. My name is Johnson, I am from, Colorado in the United states of America and am in the army, currently deployed to Afghanistan. Please write to me... generaljohnson.campbell@live.com

hello beautiful i wont mind if we can be friends my name is Francis Campbell and i could love to video chat with you,if you dont mind please are u married with kids

Hi, nice to meet you here, I see you as a humble woman, and I want to be with you. Can you please give me your email address to tell you more about me and my pictures. God bless you

Hello Dear, How are you doing today? It is Nice to meet you, How is the weather over there?