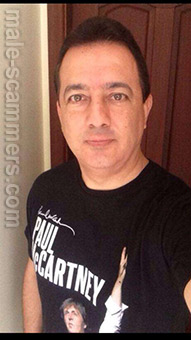 REPORT N1 (added on September, 27, 2016)
Karen (USA)
Tells you he is originally from Denmark but moved to the US after losing both of his children in a car accident in January of this year. Works as a contractor but is now in dubai doing a job. Typical scammer. After talking to him a couple of weeks, says he was robbed at gunpoint and forced to give his pin number to robbers and now they have transferred a large amount of money out of his bank account and now needs your help to send him money that he will repay. I say no, then asks if I can send him a laptop that he can use. I say no again. Ask him which bank he uses and i tell him to contact them to rectify. No response, lol. Typical scammer.