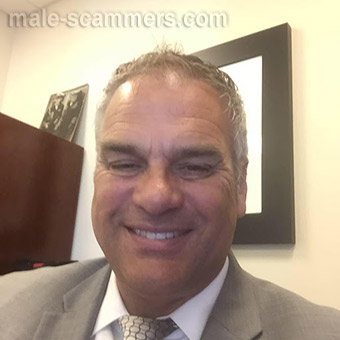 REPORT N1 (added on September, 22, 2016)
Veronica (USA)
This person followed the typical ploy. Writes to me, asks me to remove my profile because he doesn't want me to talk to anyone else, planning on coming to see me but has to go on a business trip to NY. He would not give me his home address, I only wanted to send him a little token. He goes to NY and when I asked for his flight info so I could track it, he waited until the next day to provide me the information. He would not give me the name of the hotel and when I asked for it again, he only gave me the name, not the address. He then tells me this business trip was for a job proposal. On the spot he gets the job and has to fly the next day to Nigeria to spend six weeks on the job.
He is a Google subscriber so the number is not his real phone number. I confronted him about changing his pictures on his pof.com profile and he was going to remove the profile. He said he did it weeks ago but I know it was the day before. He was standoffish when I asked him for the name of the company he worked for. While in NY I asked for a picture of the city from his hotel room and he waits for the next day to send another picture that could be any room, but no view from the window.
Once he got to Lagos Nigeria, he told me he lost his backpack that had his iPhone and laptop. He proceeded to ask me to buy him an iPhone 6 and a MacBook pro and then would pay me back. I let him know he could order those things online. He said it wasn't favorable for him to do that and now he questioned my feelings for him since I wouldn't get him these items. I let him know to never ask me for money.
He told me his background is Portuguese and that he has lived in the U.S. for 32 years. He has a very heavy accent for living here all this time and it's difficult to understand him when we talked on the phone.
This is a typical scam.