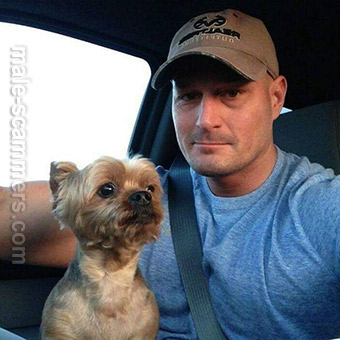 REPORT N1 (added on September, 1, 2016)
Eloha (USA)
Fake Native American.
REPORT N2 (added on September, 20, 2018)
Dianne (USA)
I want to report a man who I believe has scammed me out of a substantial amount of money through purchases of iTunes cards, moneygrams, WesternUnion, an iPhone purchase, flight ticket and travel papers. I went through your list of male scammers and I found him! He has one of the same stolen photos I was sent but he is known to me as Thomas Michael Cornish. He told me he was born in the Netherlands but moved to US as a child and lives in Austin Texas. Supposedly he was recalled into the army and sent to Nigeria on a secret mission. On March 1 he turned forty five.
I have included several of the photos he has sent me with the Yorkie he calls Django.
I have research this myself and found these are photographs of retired a Staff Sergeant.

Romance scam letter(s) from Thomas Michael Cornish to Dianne (USA)
By now you must know I have figured it all out. I have been aware that much of what you say doesn’t hold water.
A. No healthy, proud, self respecting adult male Texan would ever beg, borrow or steal from any woman esp. a woman he loved like a wife.
a. You said you didn’t bring money when being deployed because you thought you could use your credit card.
b. You said everyone brought money but ran out already. (within a month of arrival)
c. Later said you don’t have your credit card with you. You left it at home.
B. Any US serviceman deployed to another country will receive a weekly wage and have paid services such as food, shelter, WiFi, etc. regardless of his situation. Unless on duty, ie. in battle.
a. You said that you will not get paid until the end of your deployment which usually is less than six months.
b. You told me your deployment was extended and you will be moved to another location, maybe Syria...this would be leaving one Country to another
Read more