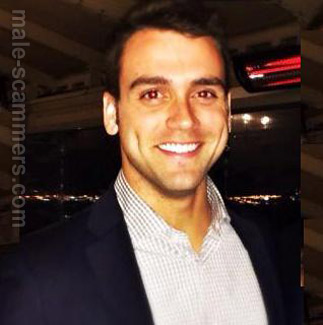 REPORT N1 (added on August, 10, 2016)
Aneta (Switzerland)
I met Gregg (or whatever his name is on Tagged). He sent me a message and a friend invitation that I have accepted. We were writing a few days on Tagged but he insisted on writing on Yahoo messenger. Unfortunately my messenger didn't work so for a few days I didn't write to him and he neither. After a few days he wrote me again on Tagged why am I not writing to him so I kindly said that my messenger doesn't work - he didn't want to believe me but anyway he gave me his skype contact and email address. So for the next few days we were writing through the email and on skype as well. He was all the time asking me to use my webcam but I didn't agree - I can write with somebody that I don't know but I will not talk through the webcam until I make sure that the person is real. Meanwhile I checked him in Internet and it sounded like he's a real man. He also sent me his pictures showing himself and telling about his father who died in WTC terrorist atack. He asked me about myself, what I'm doing etc. He told me he is on his military service, doing voulunteer job there. He told me that his service is until the end of September and at the beginning of October he's coming back to Geneva, Switzerland where he lives. At the very beginning I said that its crazy to me to come to a man who I don't know nothing about and I didn't agree. Also I wrote him that I wouldn't feel safe there and I don't have many to come. He started telling me that he has feelings for me, that he wants to be with me, he told me that I can work for him in his volunteer organization, he sent me a an plans for his projects.
(The thing about the money is not true because I can afford a plane ticket but I was thinking that after me saying that he will just let it go but he didn't).
He insisted on me to come saying that he will talk with his chapelman Venerable Sir P. Bobo (avrimars@yahoo.com) who will pay for my plane ticket. Finally I said ok still knowing that I will not come.
Anyway, I got an email from Mr Bobo telling me that he made a booking for my plane but he's short of 350 euro. I wrote to both of them that I told them before that I don't have any money to pay any fraction. Then the whole horror started..
I was talking to Gregg on Skype telling him that I can't afford any money to pay for the ticket, and that I will not come. He wanted me to called on Skype with a webcam but I didn't. And in this moment everything happened. He started calling me names, telling me that I am not real cause if I were real I would show myself on webcam, he said that I must be a man not a woman and I have things to hide from him. He started coursing me telling me that I should die and he wished me death in next seven days starting from yesterday. I blocked him on skype, I blocked him everywhere I could just not on my email account. He sent me an email saying that I'm fuck*** cockroach, that he courses me, he wish me to die soon together with my family.... I don't have to tell you how I feel...
I got an answer from him that he had already booked my ticket and I own him 359? which I can send him through money gram or western union.
Meanwhile I was searching on Internet any hints about Gregg Beaven I found an article just by accident. I translated it on google translator into English and that's how I found out the truth. In this article you can find also other names that he uses.

Romance scam letter(s) from Greg Beaven to Aneta (Switzerland)
Our lives teach us who we are,In Good Faith.> Some of the lessons have been harsh, and difficult to learn.> Each one of us has been shaped by some experiences of the past.> For me one of the most profound experiences that have shaped me occurred in my teens. At the age of 18, I experienced tragedy in my family.

I lost my dad.He was one of the victims of United Airlines Flight 93, the hallmark of Arab/Islamic De-civilization 9/11;as orchestrated by Al-Qaeda.
As you can imagine, it was a very overwhelming event in my life.
It was an event that shaped so much of who I am today.
My mom,though, was separated from dad was so devastated,and disoriented that she never overcome the shock,and was subsequently institutionalized in a Rehab facility.
We cannot choose our external circumstances, but we can always choose how we respond to them.
Some decisions in life you make,some decisions make you.
Life became a struggle. I was left to survive against odds.
I was passi
Read more