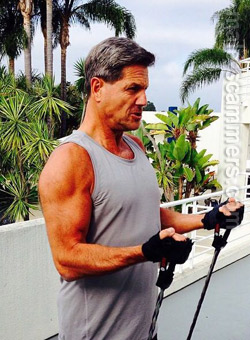 REPORT N1 (added on August, 8, 2016)
Ilene (Norway)
Contacted on match in Norway by a Brit who was in the process of moving to Oslo. Said his mother was originally Norwegian. Corresponded for a couple of weeks when he sent me a list of 50 things I should know about him. The list seemed bogus and his accent on the phone was very African. He explained that by saying he was in construction and had lived in Nairobi for 6 years. I checked the list on the male_scammer website and found it there, word for word. When I confronted him about plagiarizing it, he got aggressive and defensive. Why would I check up on him? Didn't I trust him?, etc. and very possessive. What was calling on my other line, etc. He kept called and I stopped answering. He got me to install WhatApp and we chatted constantly, so I don't have so many emails. This was my second scammer, so now I know enough to check with the website early on.
REPORT N2 (added on September, 6, 2016)
Lynn (USA)
Attached are the photos "Jeff Stewart" used to scam me. Also attached is a "itinerary" that I received as confirmation for a flight booked for him. The photos that we were used in this scam were stolen. Apparently, these photos have been used before.
REPORT N3 (added on February, 9, 2017)
Ann (Finland)
He contacted me on Match. We sent e-mail to each other about 6 month. He was very nice and I believed everything he said. He said he was at the time living here in Fnland, but went on a business trip to Mexico. Needed money for all kind of things there, and I believed everything he said. The outcome of this was that I lost 70.000 dollar. The money was always sent by bank. To a Cynthia Shonubi, and a Nosa Edokpaigbe.

Romance scam letter(s) from Jeffrey Stewart to Ann (Finland)
Thank you for giving me your email on match and your phone number I added you on my whats app now. thanks for telling me about yourself. I am really happy to have received your messages.

Just a short description about myself, My name is Jeff stewart, I Live in Espoo at the moment, I love it here in Finland, Its quiet, the people are friendly, accommodating and also very receptive.

For the few months I have been down here I would say so far so good, my Dad was English but My Mum is from Tampere, she was born in Finland and unfortunately neither of us do speak the language, as she migrated when she was a lot younger.

I am not bothered about Ethnicity, I mean romance and love has nothing to do with where you from, its who you are and what you want but I just thought I would use the opportunity to tell you as much as I can about myself.

I got this dating site through my friend James and I want to use it in meeting someone who is honest and caring, so that I
Read more