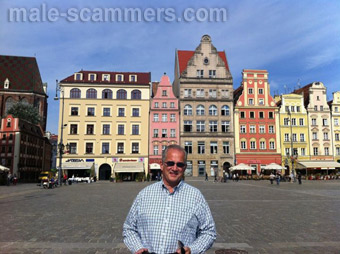 REPORT N1 (added on August, 3, 2016)
Mary (USA)
0 on the relationship by phone and messaging, asked for phone cards a couple of times, asked for money for medications,help with airfare, wanted me to transfer money in an episode bank account containing millions. When I was asked to accept wages from a company he had done work for. This money was supposed to be deposited into my account. I asked for some transaction information the fraud dept. at my bank put a hold on my account. I was told there were many hits on my account from many countries. The fraud specialist knew exactly what Christopher was up to. My account was closed by my bank. Christopher has lines smoother than you can imagine. He uses documents from BOI with the name Lorraine Smythe as his personal banker. She writes emails regarding my assistance on his account. Suddenly, his account, which I have full access to, disappears from online banking. There is one mishap after another such as an auto accident in SA, two hospital stays, limits he placed on his credit card before traveling to SA so he quickly reached his max.
His daughter is bi-polar and in an institution. Therefore, since he is a widower, his only lifeline was me.
REPORT N2 (added on August, 17, 2016)
Bertha (USA)
I was contacted on a dating site by a female, stating she had a friend who was interested in my profile. I was given his email address and entreated to contact him as he was a widow and a very sweet person. I did contact him and began a 3 month online relationship.
REPORT N3 (added on August, 30, 2016)
Anne (USA)
I signed up wit Chemistry 7/5/16. the next day there was a note from Harry on site mail. He asked That I answer on harryvanstone2@gmail .com. I did,and we corresponded till this date on e-mail text and phone till now. He told me his history and pretty well explain irregularities before they happened so though some things that threw up flags for me were all possible. I could not find any site to check him out and I tried. He got contract in Goa India for his plans and start the foundation of Shoprite mall. I checked the company online and they were building in that area. Then he started having money problems then the Union wanted final payment before they would finish the job. Thats when he sent me bank info for his account to initiate a transfer of funds. His account looked legal so I tried but they needed transfer codes. Which had to be sent from other source. He asked for$ 4900. The red flag was up but I believed him to be honest with no proof otherwise. I sent it. through a third bank as instructed. Now he needs $6400 for IRS codes. I'm supposed tobe getting it for him.

Thank you for writing, I met Amaelisan Nefaeri at my last international job in Australia, we connected and she has been about me finding love again and she promised to find me a perfect match which I am sure she actually did by getting your email.

Am currently on a job here in California almost done though, I am an architect, I am self employed and i handle contract jobs. I recently came to a conclusion that nothing is as important as a happy ending in love/life.

I was born in Dublin, Ireland on the 1st of august 1952. I am the only child of my late parents, though I had an older brother but lost him while we were still kids, My Dad's family is English & Irish background and my Mom is Icelander and Portuguese so i have a little bit of the Icelander/Portuguese accent. My father worked a variety of jobs, but he ended up as an oil merchant before he died, I was into the oil business with him but after his death I decided to go into construction as I
Read more

Romance scam letter(s) from Christopher Donovan McCoy to Anne (USA)
Hi Honey, I hope you slept well, and your day is coming on fine? yesterday, we did another overall inspection of the entire work we have done so far with the project and I discovered some irregularities with the wing of the mall foundation. I am both frustrated and unhappy with this development because this discovery could send us back one whole week but I am glad we discovered this in time to rectify it. Today I had to employ more workers and bring in more machinery in order to meet up with the deadline. I am relieved but I am not going to be able to handle all the expenses from what physical cash I have left and the amount needed is not what I can just get off you or anyone else who could or would have been willing to help, so I am making a risky decision here to trust you with my life savings. My workers have decided that they will go on strike in three days insisting that I follow their new Union laws and amendment which came into play just a couple of days ago.
Read more