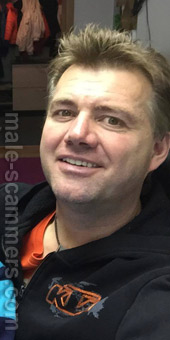 REPORT N1 (added on April, 12, 2016)
Stevie (USA)
I was friended by a person going by the name of Calvi Harris on Facebook. He stated he was living in Dublin, Ireland but from Copenhagen, Denmark. We started exchanging messages on Feb. 11 this year until last week. His messages were often about expressing his love for me but occasionally mention "personal" information; he was an engineer by trade, dad lived in Denmark, mother was decreased, moved to Ireland for his job, had a son who was 9 yrs. Old and went to a boarding school in Dublin, and was divorced years ago when his son was small.
Our last few exchanges were about a subsea contract he had just won and was heading to Malaysia. (Week's before he mentioned having to go to Japan for work, but did not give details.) There were a few things that appeared odd. After stating he lived in Dublin he mentioned he lived in the UK. I noticed questions I would ask often went unanswered. His facebook profile also showed no other friends, posts, pictures, etc. At one point he wrote me a poem and I wanted to find out the title and author. My Internet search led me to the male-scammers web site.
I messaged him back that I had found many of his messages to me on a male scammer web site and de-friended him.