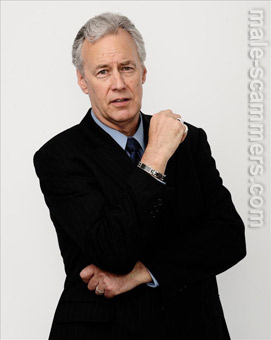 REPORT N1 (added on April, 12, 2016)
Darla (USA)
This person sent me a message on the dating site then asked to get off the site immediately and texted me the went to aol messing get and he was in Florida and had inherited a lot of money for his parents owned the largest fabric manufacturing in Gernany. His wife had passed away 10years ago and he had a daughter in law school and then he was going in to the fabric business here and he became very romantic fairly quickly and wanted marriage and told me of stories of him being scammed out of 700,000 dollars but it was just money and he told me one time he was worth 15million and then later 450million. I had been reviewing his phone numbers and e mails but not able to get much information then sent his picture and it was of the Australian actor with first name Peter. I stopped all communication with him and he has called me on at least 5different phone numbers so then I just block them and then he sent me a message on aol and said some man called him said I was talking to him now so this scammer was going on so he would contact me again which I hope is true. I never gave him money for he did not ask for money but I had been only talking with him for a month.

Here are a few things I wish to do with you at some point in this lifetime:
Be your best friend.
Get caught with you in the rain.
Dance with you in the rain.
Stargaze on a clear night.
Watch the sunset together.
Spend all day with you doing nothing.
Moonlit walks on the beach.
Be more proud of you than I already am at this very moment.
Go on a carriage ride through the park.
Do a crossword together.
Go to brunch.
Have a disagreement (it could/will only make us stronger).
Go for a twilight horseback ride.
Watch a bad movie together.
Spend the rest of my life with you.
Have our picture taken together.
Eat ice cream with you.
Make love to you passionately.
Go to a museum together.
Talk to each other using only body language.
Give you space when you need it.
Accept you totally and completely - flaws and all (I already do).
Discuss current events in a heated debate.
Have you see the error of your ways from aforementioned heated debate
Read more