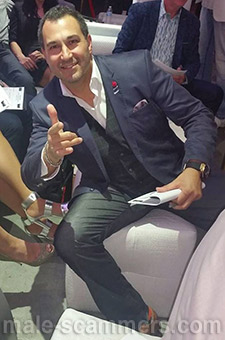 REPORT N1 (added on March, 30, 2016)
Trish (USA)
He charmed his way into my life on Zoosk, saying he loved me and he wants to marry me.We exchanged emails and numbers.
He says he is a business man. So he went to Cape Town on a business trip and when he attempted to check in a hotel his card was declined. He maintained he comes all the way from Republic of Pamana of which he was using a foreign account.
So he contacted his bank and they said it would take 14 working days to sort it out. He wanted R15000 from me. That's when the drama started. Thank God I'm wiser!
REPORT N1 (added on November, 15, 2016)
Birgitta (Sweden)
Allen Smithsson contacted Me on Badoo in april this year. He was warking in Turkey with construction on a footballarena and he needed Money to reach up to 50 % so he could get his Money paid out for his work.
Money were send to MR Israel Aideyan to a bank in Istanbul. I send him a lot of Money Three Times. He is now reported to the police.
REPORT N3 (added on November, 24, 2016)
Indigo (USA)
I started chatting to this Lorenzo dude from Gordon's bay And after 4days he wanted to buy me a ring... I immediately knew something is wrong and blocked him... He sent me the exact same letters as he sent on Trish on this site... his a scamster.
REPORT N4 (added on March, 23, 2017)
Eloha (USA)
Scammer who wanted to meeet me on Tagged - fake profile - image stolen.
REPORT N5 (added on March, 26, 2018)
Pamela (USA)
He contacted me first on Match.com and left his email for me to contact him. We've been emailing. Details of his emails sound suspicious. After some research, I found letters that said almost exact stuff that was posted about a Ron Williams from MaleScammers.
REPORT N6 (added on December, 24, 2018)
Rhonda (Canada)
Ryan is a gemologist. Leaves on contract to Turkey. He has various problems getting home - car accident, insurance for the gems. Basically he needs money.

Romance scam letter(s) from Lorenzo Franco to Trish (USA)
Hi Trish
Was nice chatting with you over the site, and feel i would share with you more about me
I am Lorenzo an easy going single man with no kids and never been married,I'm originally from Republic of Panama, and came to south Africa 2 years ago
I come from a small family- I have a sister who passed away 6 years ago,I joined the dating site hoping to find that special woman i can spend the rest of my life with,
I am self employed in the building trade. I work using contract for property investment portfolio. i buy distressed sales and renovate/upgrade finishes and resell or keep in the rental portfolio, depending on the property.though my work take me to places ,i make the houses more functional and have the best flow possible. I love resolving space, it gives me such a thrill to see a boring house transforming into an amazing space :-)
My job is to resolve the interiors, and make sure all the work is done on time, and to exacting standards. High end proper
Read more

Romance scam letter(s) from Lorenzo Franco to Pamela (USA)
Hi, Pamela.
Thank you for your lovely email. I am glad to read from you once again and equally impressed that made out time from your busy schedule to read my long email and responded in such an open manner. In a bid to keep to my promise of telling you all about my self, I nearly wrote a book...lol. Actually, Men with no hidden skeleton say all about them even without being asked, it is just my nature as a simple man living a good life with a good job and good pay. I am not the kind of man that rush into a relationship or marriage, I have learnt to thread with caution in everything that I do in life. I feel we must have to be certain of ourselves as in making sure that this relationship is what we want in life because it is a strong determinant of our happiness & future in life. I presently yearn for a woman that the both of us can grow old together, share ideas and become like pilot and co-pilot. I need a woman who is intelligent and also a woman of integrity, a
Read more