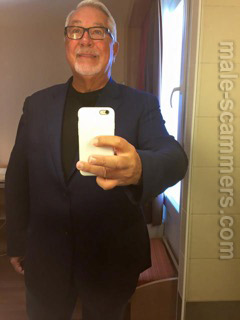 REPORT N1 (added on March, 14, 2016)
Jane (UK)
Initial contact via Christian Mingle, where after a few short days, i was encouraged to exchange email addresses. Communication continued in the form of emails, mainly from him, initially in the form of lengthy questionnaires - to gain a deeper insight on our faith and potential friendship. He suggested that he was french, but when i spoke French to him, or wrote in French to him, he requested communication in ENGLISH. All the lengthy emails have the subject line in CAPITAL LETTERS. They are all start with some term of endearment Hello Sweetie, Hello Honey etc All phone calls are on WhatsApp, and excuses are made continuously about the sound quality. - its over the internet to a foreign country - not up the road (he purported to live in Deptford which is in South East London some 25 miles away!). He apparently has a Daught of very early 20's a Paediatric Surgeon in Dubai. A sister who ran the Oil drilling company until she had an accident and is informed, and has a full time carer. He is often going to Bible meetings, or seeing his Pastor - Pastor Howard who is only too happy to meet me soon. Look on the internet - no Pastor Howard in Deptford, or that area!. He did name his church, and it was pentecostal, but the nearest one with that names is 350 miles away from Deptford! The Church size changes every couple of days it did have a congregation of 25 - 45, but more recently it has seen its numbers grown to several hundred! Excuses are made continuously as he is about to start a contract - eventually weaselled out he is a Contractor of a company that sub contracts in oil Drilling - at the moment he is in the Gulf of Mexico and will be gone for 3 x weeks. Emails invariably come at around 7 - 7:30 am in the morning - asking if i have slept well, in the evening the emails come from around 8:30 - 10pm, with a phone call after 10pm, in recent days he has requested that we pray together, after i have taken my shower and got into bed. There is no praying - he has got some hand picked bible verses, and reads them out. He has sent photographs, which all have titles but no date, and nothing to distinguishable to say where in the world he is. For me one set me thinking - if you took this photograph in your bathroom this morning in England - how come there is a certain piece of equipment which is only found in the USA!. He describes himself as a Frenchman, having been brought up in the Town of Nice - pronounced "Neice" if you speak french and were brought up there, he pronounced it NICE! He suggested that he only goes shopping for groceries every 6 weeks,, when pushed he said that the Supermarket was Price Chopper. BUT there is not a Price Chopper supermarket in the UK. Getting suspicious and now stringing him along, i grabbed his photos, and looked them up on Google images - hey surprise he was on Match dot com. living in either New York, or Pensylvania. The letters are now coming as long love type poems - not discussing anything which we have discussed, only undying love for me, and looking forward to meeting. I questioned him at length in French, and eventually couple of times he came back to me with a few words in french - obviously from Google Translate, His diction is not of a french man - definitely foreign, possible american tone, but more of a African tone and diction (i should know we have a lot of black Africans at my church. I came across this website tonight, and having cut and pasted passages out of the letters, then the letters came up as poems, and published love letters. I was sucked in by him for around 10 days, but now i semi communicate for a laugh, and find out what he really wants!

I want you to know that I am very delighted to hear from you especially all the things you have told me about yourself/personality, You have qualities that a man will want in a woman all filled out in your profile. I have been thinking so much about you, I have enjoyed having someone to wake up in the morning and write to. It is not very difficult to build a relationship all it takes is the commitment and choice must be made and no mind games, and contacting each other regularly is very important. I know some time's it seem difficult to meet the right person you are compatible with, but there is something I believe, you can never meet a perfect match, you build your perfect. Relationship with time and commitment and honesty you can get the most wonderful relationship you never believed exists. I guess what you are looking for in a man is the same I'm looking for in a woman. I want love, kindness, friendship and great love as an adult you are suppose
Read more