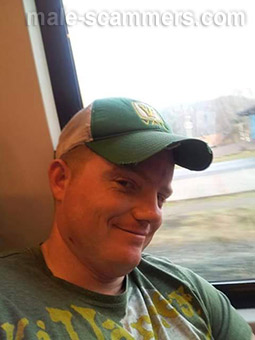 REPORT N1 (added on March, 10, 2016)
Diane (USA)
This person scammed me out of 70,000.00 he was in Facebook and asked me to friend him he told me that he was on a.peace mission in Tripoli Libya and had been there for 18months and was thinking about retiring after one last mission he told me sweet I was. This went on for about a month then his final mission came while he was out there him and his comrades found gold bars so they took them he got shot in the leg and had a be hospitalized this went on for about another month he then told me that he was going to be sending his retirement papers along with his medals and the gold to me to hang on to I was suppose to have signed the retirement papers for him and send them to the US army headquarters but that never happened he had a dipolmat fly from Tripoli to the USA but he had to stop in the UK which the customs scanned the box and found gold in it so they held the box for days he pleaded with me to send money to get the proper certificates for the release of the box it ended up costing me over 50,000.00 he kept telling me that if I didn't do this that there would be no way of getting the retirement papers to me now the box is supposedly still in customs then while he was in the hospital he talked to the doctor and made a deal with the doctor in which I would send 8,000.00 to the doctor for a down payment on his bill and the doctor would release him from the hospital but then the manager got involved and the price went up he told me if I sold my car and sent him the money that as soon as he got home to me he would buy me a new car he also told me that his parents died in a airplane crash from the military and he was a only child and got all of his parents money which he said he had alot of money and two houses he also told me when he gets to the USA he would buy a home for us so in the mean time he asked me to sell my manufactured home I then sent him more money for his ticket which cost 4300.00. Then he tells me that the manager needed half of the hospital bill to be paid or he would tell his comandor what was going on there was another 13,230.00/ so the doctor takes him to the airport gets his ticket and he takes off a couple of days later I hear from him and he is in Quebec Canada with not enough money to make it to the USA so now he needs another 4,000.00 to pay for the rest of the flight he has taken all of my money now I have two weeks to move he has tried to get more money from me telling me that the hotel will take the rest of his money and will not be able to fly home unless I send him more money I told him no way but its a little bit to late because I am broke and have no where to go now he won't talk to me he has gotten a phone somehow but he won't even answer that he is very good at what he does he made me fall in love with him and now my heart is sad and broke and so am I this is my story of being scammed from someone who was supposed to have been a Lt in the US army.

Romance scam letter(s) from Jude More to Diane (USA)
The Clark has calculated the bill which amounted to 32450... the manager has been the person making this so difficult for us.. He insisted that the all the bill must be cleared and i know we can be able to raise the total fee....
i have explained and made him to know how important and urgent i need to come back home but he still turn me down.. all he ended up saying is that since we couldn't come up with hospital bill he then have to bring Peter into this matter but i insisted that he shouldn't, because if Peter should be involved in this issue all he will be doing is to report this case to headquarter which might lead to my total dismissal and i will lose everything .

i also came up with the idea you gave to me which is signing a contract with them, i told them that i will be making the payment two days after i get home but the manager started being mad at me again...
when i notice that he want to contact Peter i still pleaded with him... babe i then came u
Read more