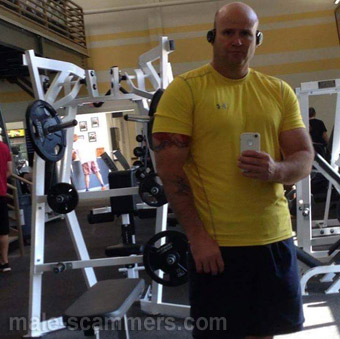 REPORT N1 (added on February, 17, 2016)
Darla (USA)
William Haggard invited me on face book a few times in the past but I didnt accept. About a week ago I accepted. He gave me a few pictures of him.. one was a soldier with the name Haggard on his arm. Said he was born in Montana USA but was stationed in Ghana Africa. Said he was a E8 Officer.. Navy.. I was going to send him a care package. Then he said he was stationed in Accra Navy Base in Ghana Africa.
I have already caught him in a few lies.. so the red flags were flying. He then told me he was in the Army. Came up with all kinds of excuses to cover up his lies.
He wanted to me to send him money to buy himself a phone. $250.00. That was the end of that.
Since then he has told me that he had my address and was going to come to my home. I told him I had a gun and that it was a really bad idea for him to show up.
after that went down I looked up Accra Navy Base. {scammers} I looked at the pictures and found one that Lucus had given me.