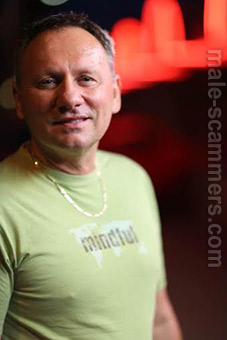 REPORT N1 (added on January, 28, 2016)
Anna (USA)
Met online in October 2015. Person described himself as half British and half South African who had grown up in Durban, SA. He moved to Maryland in 2015 after visiting in 2005 from Hollywood Fl. After a week of conversation he said he was a Civil Engineer by trade and was in the process of preparing a blue print for a contract he was trying to bid for. One afternoon,he sent me an email stating that he had just received a phone call and had to go to Miami to meet with delegates sent from Africa to discuss the upcoming project. His flight was leaving at 1:45 pm, his email came in at 12:30. He said he was taking his cell phone with him so that we could stay in touch and gave me his email as well. Another week went by, we talked every night,r he said he was wrapping up the meeting and would I pick him up at the airport in Baltimore so that we could meet. I agreed, one day later he calls and says that he was chosen for the contract that he was suprised but filled with mixed emotions at the same time because he had to leave right away to fly to Ghana because the Prime Minister wanted to meet him that Monday morningand go over the details. This was a road contract that the PM wanted to have built before the next election. He leaves to go to Accra, is out of touch for two days, then calls me to tell me he is sorry he didn't check in but he had to get settled at the hotel outside of Accra that was near the work site.We continued to talk nightly while he was setting up the office, buying office supplies, arranging to interview and hire 3 supervisors.He was very romantic over the phone, sending me love songs, and professing how I was his precious. One night he called and said that he was having an app designed that could only be used on the IPHONE 6s and that he didn't have time to buy them before arriving in Africa. He asked if I could send over 2 phones and that he would pay me back when he returned home which was to be within 3 weeks. Me like the fool mailed 2 phones to him. He gave me a PO box number to mail it to at Customs under the name of Charles Tettey. I sent the phones over one at a time,both requiring signature. The second phone took over two weeks and I notified the PO to send an inquiry as to where it was, they marked it urgent. One week later it mysteriously shows up in customs. Nevertheless it was supposedly signed for upon release. He then waited another week after receiving the phones and said he needed to order road equipment and the stones, etc from the quarry except the owner said he needed to pay upfront in cash. He said he had traveler's checks but he could not cash them and said he didn't have access to his bank because he was locked out of his account due to the fact he had put an extra security code on it.

How are you doing today? I have also been on the site for less than two weeks. My fav colors are pearl white and turquoise... I like anything sea food except sushi. What about you?

I'm passionate about life. I'm curious, fascinated and astounded about human behavior, all cultures and of what we are capable both good and bad. I love to laugh, eat, drink, love and walk forever. I'm concerned about the future but believe more than ever about the power of NOW.
Music is my greatest influence. I believe in the pursuit of good health and kindness. My companion is my dog, Achilles.

I consider myself easy going, responsible, adventurous, romantic, and ambitious. I'm a Civil Engineer by profession, I enjoy doing a lot of things, but to mention few, I like sports, watching movies, going for walks, listening to music, swimming, dancing, walk on the beach etc.

I’m looking for that special someone to share the rest of my life with, not just someone but one who
Read more