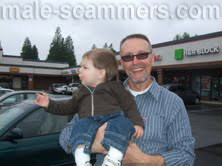 Romance scam letter(s) from John Roberts to Nan (USA)
Thanksgiving is not only about thanking God for what you have been blessed with, it's about helping the less fortunate so that even they can have reasons to be thankful.
Have a selfless Thanksgiving Day!
May you be blessed with the quality of gratefulness today and forever.
Smile and be thankful! Today is Turkey day!
Thank everyone you know. Thank your parents, your siblings, your love and all your friends and relatives. Be thankful because its the fall season. Happy Thanksgiving.

How are you today? I hope great and fine..Hope you had a wonderful thanksgiving..you are in my thought..enjoy your day..John

How are you doing? I hope great and fine..nice to know that you had a wonderful thanksgiving with your family, I had a great one here too, I am just gonna be indoors for the weekend relaxing and resting as much as I can.
I hope you can write me sometimes telling me some more about you and some co
Read more