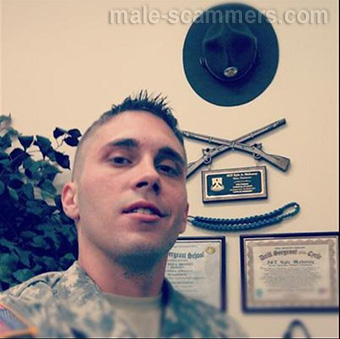 REPORT N1 (added on January, 12, 2016)
Amber (USA)
I was signed in OK Cupid online dating and I had this message from this man that claimed he was sergeant kyle mahoney and he gave his number and if I wanted to get in contact with him for a constant and further contact I had to text to him in that number. In the beginning I read his profile it looked as someone serious but still had to contact with him and know more about one another. So I texted him and he got back to me the same day, he introduced himself and gave a wide description of his career, and if I wanted to talk more with him I had to give him my email address so we could communicate more and exchange pictures as due to his mission in Afghanistan they don't have other options to communicate with their relatives.. Anyway until now was normal because when you are willing to know someone you provide at least ways of communication. We exchanged emails he sent pictures of him and his daughter. While in emails he was telling me a story that he host his wife in an accident about 5 years ago and he had only his daughter and his mother that they were living in Texas to a cousin of hers as long as he would be on duty. This for about 2 weeks he promised me the earth and the sky that I was the one he was looking for and dye for anyway I was playing the game as I know that until I meet him in person I wouldn't trust him 100 %. Then he asked me to sent his mom and daughter money as they run out of because he left them some money but weren't enough and he thought that he wouldn't stayed this long over there... Anyway I asked him where to send the money and how still playing his game and he told with western union or money gram or any exchange store I could, and he gave me his mothers cousin name Samuel Rainey and his full address. Anyway still in my heart and mind I knew something was wrong but still I wanted to try I didn't sent him the amount he asked, though I could. And then I provide him with the transaction number through money gram. Then I was tracking the money. They (I mean him)didn't picked them up until 3 days I sent them, another trick he used to convince me. During this time I keep on comunicating with him and he called me.

Hello Dear,how have you been and its nice to hear from you and i want you to know that am a native Of Bakersfield,California. i was commissioned as a second lieutenant of Aviation through the ROTC Program at Central Washington University,where i graduated with a Bachelor of Arts degree in 1995.my military education includes:Aviation Officer Basic Course,Rotary-Wing Flight School, Armor Scout Platoon Leader Course, Military Intelligence Officer Advanced Course,and the Army Command and General Staff College. I holds a Master of Science degree in Public Administration from Central Michigan University.