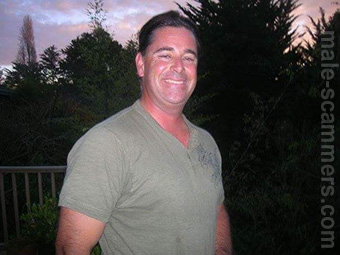 REPORT N1 (added on November, 24, 2015)
Carla (South Africa)
This man is very persistent. He friend me on Facebook, I ignore his facebookmessenger messages for a while. He kept calling me baby. Later on I said I insist that he send me my name written on a paper that he hold in front of him, to see if he is existing. Two days later he send it on Facebook messenger. Two photos of him holding a paper with my name. Then we started to communicate daily on Facebook messenger and whatss app. He said he is a construction engineer, studied at the university of Spain. His parents died both in a car crash when he was 7 years old. He then grew up at his father's father. He got married at 37 years old to Megan and they had one kid girl named Ashley, now 8 years old. He wrote his wife died 4 years ago in 2011 due to lung cancer. He is since then both mon and dad to his kid. He send me 4 photos of him and his little girl. And 5 photos of him alone. All of it was send through Facebook messenger. So, he told me he fly to SA on 16 Nov 2015 to Johannesburg, then to Capetown to take care of a contract he had with Telkom SA, to supply them with heavy underground cables. It was worth 50 million SA RANDS. He lied further, telling me he uses a agent called Paul van Vuuren. This Paul job was to fetch him at capetown airport, and taking valentin to the harbour where the supplies arrived. Valentin told me he had to pay taxes and duties of R230 000.00 to the authorities. Now it cost him a further R110 000. 00 to put this 6 x 40 foot shipping containers on lorries to get it from Cape Town to Pretoria. Then only the deal is finished and will he get paid by Telkom. He phoned and whatss app me today to say he has trouble, he call himself Superman. He said now Superman needs rescue. I phoned him then. On the phone he said he just needed R32000. 00 to pay the transportation of the supplies to bring it by lorries. He would fly from Capetown to Johannesburg, to come and stay at my house as it will take a few days for the road fright to arrive in Pretoria. Long stories short, I told him I cannot lend him the money. He must contact his bank and ask for a overdraft or a loan. Or he must offer his house in Liverpool as security against a loan for his bank to gave him such money. He send me a few what's apps there after telling me he did not succeed to obtain such loan. I told him I am trying to see if I can make a plan, I never intended to borrow him money because I'm fully aware he is a well established scammer. Especially because he did wrote my name on a paper x 2 and send it to me.