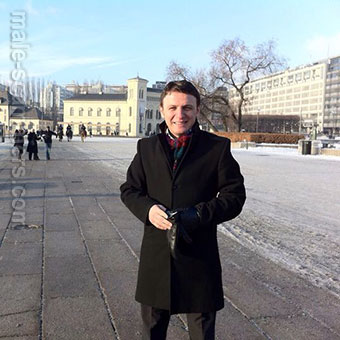 REPORT N1 (added on November, 19, 2015)
Fay (England)
On the 31/10/2015 Rostex contacted me through plenty of fish dating site said he was from Poland and lived in the United States his daughter is married and lives in Canada he moved to Scotland and that he works for Grangemouth Refinery as a free lance contractor . We had been in contact by email and sometimes on whatApps one day I rung his number by mistake and it said I could not call this number as my phone is not allowing it so I typed a message and asked if he was abroad but of course he denied it and said it company phone made a excuse.. I had a feeling that he may be a scammer because in some of his emails said how much he loved me and he could not live without me. I thought okay let's see where this will go he said he would meet me, but then he change the arrangement said he had to go away to fit some equipment for 2 weeks I just knew that he was a scammer he sent me a email today 15/10/15 to ask me to ring a number in the states to ask his friend if he sent the funds I wrote back and said I could not do it as it not my responsibility.
REPORT N2 (added on December, 16, 2015)
Deb (UK)
He says he is an engineer on an oil refinery. If you arrange to meet him he doesn't turn up and gives a believable excuse with a so called Dr ringing up to confirm he has had a car accident and is in hospital along with a photo of Rostek in a hospital bed.He will send pictures. His voice doesn't match his ethnicity. He will not answer some questions. He then asks for money as he needs to buy an expensive piece of engineering equipment to finish his contract then he can come and meet you. He asked me to call his cousin for money in USA. The cousin does not have an USA accent but uk accent possibly African ethnicity & wasn't surprised to get my phone call even though Rostek claims he couldnt call out. Rostek then ask me to make up the difference. I refused. He then said speak to my sister she will confirm I am genuine. I refused.I haven't heard from him since. He was very lovey Dover in the beginning and said he lived in the Strand London.

Thanks so much for your message, Its really nice to have read from you, I want to communicate with you to know you more, You can ask me what ever you want to know about me, I will let you know all, Am Open minded Man, What ever I told you here is what you see in me when we meet in person, I have not been here for long as well about a week now, But have been busy so have not had time to go through, But am not working today so its good Saturday here for me I want to find that lady that we will communicate and see where this leads and am happy that you have written me back, I will write to your email and we can take it from there, OK, Am Originally from Poland, But have lived most of my life in the United States, I came to live here when my wife died and my Daughter got married and so many things around where we live was reminding me of her, So was advice to relocate to be able to live on that is how I put in for Jobs here in the UK and got the Job am doi
Read more