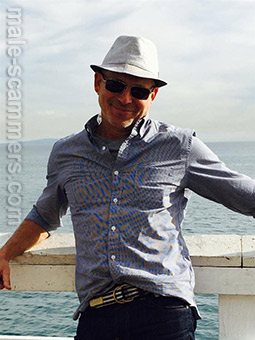 REPORT N1 (added on October, 20, 2015)
Kathy (USA)
1st contact me on Match on 9/21/2015 under the Id "Fixit21", he said it was his last day on match and could I email him on his private account. He immediately began to romance me after telling me he was widowed 10 yrs ago, he was a contractor for a financial firm from the UK; he had a daughter that was studying to be a pilot in Italy. He said he was born in Palermo, Italy but came to the US at age 6, then went to Germany at 16 to study, then getting a Masters degree in Scotland, it was here that he said he had a thick accent that sounded German. He did call me once and left a message that was very hard to understand because of the accent. I called him back but only talked a couple of minutes because I was in the car, his accent was very thick and I could hardly understand him. In addition he wrote that his father and son had been killed in a car accident and he moved from Calif afterwards because of the bad memories. His letters continued for over a few weeks, at first he was on a business trip to Texas for work, he was there a week then emailed that he was successful in getting a contract signed and that the company then wanted him to fly directly to the UK to sign papers. All along I was trying to find him on the internet to no avail, he finally gave me the name of the company "Bains International" in Kent England. When I searched on that along with his name a scammer profile popped up under your website. Once I realized he was a scammer I stopped communicating with him, he emailed and tried to call 1 more time then stopped. I have pictures of the person he claimed he was that are different from the Ryan Gale previously reported. I never let him get as far as asking me for money but wanted to tell my version along with giving you additional pictures.

Romance scam letter(s) from Ryan Prezo Gale to Kathy (USA)
Good morning Kathy,
Thank you for responding to my email/request to contact me using my private email; I am sorry that i delayed my response which was as a result of Sunday and activities yesterday. I am glad that you did because I would have lost contact with you as my subscription expired and I can no longer access my Match.com account. Anyway, that is by-the-way since I can still reach you via your private email. Once again, thank you. I have been In and out of town this past week so it was really a long week till this morning. I have sorted my busy schedule out and now free so let talk about love .Lol. Yes, am still interested!

I must confess that I am a Fun loving, humble man with the belief that a woman should be treated like a lady and that it is always ladies first. I am a Fund Manager by profession; a work I love to do the way I love to enjoy life. I am generally a happy, upbeat person who has achieved much in life professionally, financially and person
Read more