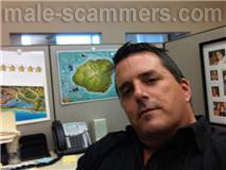 REPORT N1 (added on May, 24, 2012)
Jacqueline (Australia)
This man is a very severe predator he sets himself up on dating sites tries to win your confidence and then wants money from you.
He addresess himself as and Irish born male who grew up in Manchester in the UK where he met married his wife moved to Australia where he`s lived for passed 18 years. His wife supposedly passed away around 5-6 years ago from breast cancer which was traumatic for him. He claims to own a company and lives in Wagga Wagga NSW Australia his company name is so allegedly named Fwalshinc. This person is a liar of great magnitude due to my police background my late husband was in the job I have a very suspicious mind it was after a week of emails to and from this man I became suspicious of him for he was telling me how much he loved me how happy we will be etc.
It was on the weekend of the October long weekend when all was revealled so to speak. You see the tuesday prior to the weekend he apparantly had to fly to Nigeria on business which is when I recieved an email from Mr Walsh proclaiming he had lost his wallet and his shipping documents and that he needed my help.
This emediately sent of warning bells for me, he then proceeded to inform me that he needed the amount of 5,000Uk dollars to help him, which I quickly told him no way was I going to send money to someone I hardly new and to contact his company for help- got no reply I also informed him he should approach the Aust. Embassy for help which he then informed me that one never existed in Nigeria. He then tried to make me feel guilty by saying how he loved me thought we had a reloationship said he had a solid gold watch he would try to sell which I answered great idea that was the end of that conversatiion via messaenger on Facebook.
Next day was an email from Paul stating he had sol his watch for the amount of 3,500Uk but still needed 1,600Uk I flatly refused to give him money so his reply was that he would send me his itinerary to prove to me he was genuine, well that was where he made his biggest mistake for he had a different name which was Paul Richard Fredrick so I googled this name and foun him on a UK dating site called Mega Friends when I confronted him with my findings he got quite angry I have since then been trying to let as many authorities as I can know of this Individual.

Romance scam letter(s) from Paul Frederick Walsh to Jacqueline (Australia)
Thank you so much for your email on RSVP... I will so glad and willing to share so much more about me with you on personal email..
what's your surname ?
what do you do in your spare time? what are you looking for?
This is just a short email to verify your email. I will be looking for your email
Regards,
Paul

Thank you so much for your comprehensive email, i feel so needed and appreciated after reading your email. I will like to tell you little more about me, I am 51years old and widowed which i already told you as well, I am 185cm tall and averagely built. I was born in Ireland but i spent most of my childhood time in Saddle worth which is a small city near Manchester. I just moved here from Brisbane, though i still own my house in Brisbane but i just needed a change of environment as i go to Brisbane as well. I own my business and i work as a project manager and consultant for multi national companies around the world,
Read more