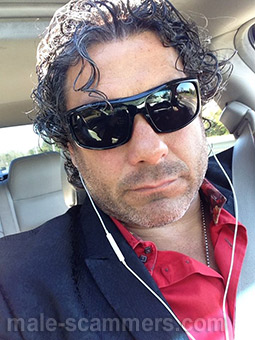 REPORT N1 (added on October, 8, 2015)
Fay (Scotland)
Robert got in touch with me on Great British Penpals and he asked for my email address which I sent to him. In the evening I received a email from him and it the way his letter was written that I believe he is a scammer. He say his wife died 5 years ago and he travels all over the place and he is a merchant. He is of Italian by nationality. The whole of his email makes me think he is another one.
REPORT N2 (added on January, 13, 2016)
Liz (USA)
Robert contacted me from Widows and widowers website and soon switched to private email listed. Has ask d for and received funds for business use, said he was a merchant dealing in construction equipment and gems. Also said he was ill, his child was ill, and needed funds to return to US. I received exact emails( and many more) that Fay did except they were addressed to me. He reported he lived in Harvey, LA and was doing business in Accra, Ghana.
I have a copy of an Italian passport for Robert Davidson reporting birth date of June 23,1960 and birthplace of Bologna, Italy.He says he has a ten year old son. Very charming but command of written English not always correct. When I reported to him that he was on this website as a scammer he said his email was hacked and that was reason he was on here.
Wanted money sent to:
Citibank N.A 399 Park Avenue New York 10043. USA. Swift code : CITIUS33 Credit: Guaranty Trust Bank LTD. Swift Code : GTBIGHAC 25A Ambassadorial Area, Ridge. PMB CT416 Cantoments. AccName: ARTI & REALTY LTD AccNo : 216105184230 Address : 126 UCL Plazza Taifa Rd Dome.
REPORT N3 (added on January, 21, 2016)
Laura (USA)
This man really had me convince. That is until he demanded me to send money to his son Anthony, for his 9th birthday. I am very embarrassed about it all. I fell hard for this man. I know, he fooled me. He asked me to be his wife after a few weeks of dating on the site. I never met him personally, I did see him through chats. Google hangouts. Yes I have the same picture that he has on this websit and more. He even sent me pictures of him with his son. Wow. That is my weakness, CHILDREN. How did he know that without ever talking to me? This is so embarrassing. I am a widow, he used that also.
REPORT N4 (added on February, 24, 2016)
Tatjana (Germany)
He contacted me on the dating site, after a few messages he asked to Talk on Hangouts. He apparantly had a 9 yrs old soon who lives with his mom in Florida. In Feb he had to go to Ghana to sort out why his shipment endend there and not South africa. He Tool 30000 Dollars with him knowing his Card would not work there. Been a Bank clerk myself I told him that is rubbish. He then had to pay 56000 Dollars to get the shipment er send as the paperwork used was out of date..... I questioned that ..... He then asked me to send money so he could find a place to stay there. Told him I was now unemployed and that I can't..... 2 days later he stopped contact. Have Found different Profiles of him on American Match and confronted him. His excuse was that his Internet Stick with fotos and Laptop were Stolen out of his car..... I had a bad feeling all along Thats why I invented the story about me losing my job......close call I would say!!!
REPORT N5 (added on October, 26, 2016)
Eloha (USA)
Scammer.
REPORT N6 (added on May, 20, 2019)
Kristie (USA)
I met this person on the Dating website Plenty of fish.
He claimed to be self employed contractor . Shortly after we met on plenty of fish he asked if we could video chat . the video was very poor. He asked me to get Hangouts app on my phone so we could talk and video chat . He said he lived in New York and He was a widower with one child. A son named Zach He sent me pictures of him and his son . Shortly afterwards he told me he had to travel to Alaska for a job. Once there here sent a text requesting my help on an urgent matter. This eventually ended up with me sending money to a woman for his son who was supposed to be in boarding school.Long story short it was all a lie there was no way to verify any of this. I wish I had known about this site before I met him.
REPORT N7 (added on November, 4, 2021)
Jane (USA)
"I am a matured and easy going man whom is with a caring and sincere hearted heart which i always value the family and abide to make a good home with a god woman of my choice. I need a serious woman of choice my whom i can love and to be loved with much trust , i would also like to meet that one of my choice, You can WhatsApp me for a conversation where we can start an acquaintance My WhatsApp is (+1 6318566404 )....
It's interesting to me to hear that - I find the information interesting. That grammar rule is new for me - I've come across a lot of grammar rules but this one is a new experience for me."

Romance scam letter(s) from Robert Davidson to Fay (Scotland)
How are you doing today Fay.It's so nice and lovely to be communicating with you.In this world we all have to give each other the chance before one can know the good and the bad side of a person.I have only join the online dating for the first time hoping to meet someone to spend the rest of my world with.I am Italian by nationality from Bologna.My father was English from Ashford in Kent but my mother was from Bologna in Italy.

I lost my late wife through cancer and she died 5 years ago.My late parent also followed so you can see it been very difficult for me bringing up a 10 years young boy myself.smile.
He is my only child and i was also the only child of my late parent.I was very close to my mother and she showed me many things.I learned cooking from her and i can cook all kind of meals.She taught me about caring for people and also respect and being honest.She also taught me to show love to the poor and the needy.I am someone who likes peace.I am self employ
Read more

Romance scam letter(s) from Robert Davidson to Liz (USA)
Good morning to you my queen .It's so nice and lovely to read your email.I also enjoy hearing from you all the time my love.I mean every word i have shared with you and soon i will be home to show it real to you.I can't wait to be touching you my darling.I will spoil you my love because i love to spoil my partner.
Thinking of you is what i do all the time my love.You have always been on my mind.I can never erase you from my heart and mind my love.You are the best ever to happen to me.I haven't started lesson yet my love but that will take no time my love.I just prepare normal cabbage with carrot my love.I will make one for you second day when we are together as i will need lot of rest on the first day my love.
My arm is getting better and i am okay my love.I can't wait to be home for you to nurse me better with smiles and kisses..smile..Your love is the only password that logs into my heart and browses in my bloodstream.Everytime I look at keyboard I see that U an
Read more

Romance scam letter(s) from Robert Davidson to Laura (USA)
Hello Laura, i just sign in my gmail account and would like you to message me jhuth9633@gmail.com

Hey Beautiful, I just wanted to do something simple to say I can't stop thinking about you and to put that smile on your face. I want everyone to know how much you mean to me. Ever since you have entered my life, I've been flying on rainbow and I have not come down yet.

I still don't know what I did to be so lucky to have you in my life, my dream come true... I am so thankful though. In this short time that we've been together, we have grown so much and I can't wait to see what the future holds for us.

Laura, i have told Anthony a lot about you and also shown him some pictures of you,i think have really made his day by telling him more about you because he did Congratulate me and was so happy to know ,please tell me if you are truly serious about this relationship because i can't stop thinking about you and don't want to be hur
Read more

Romance scam letter(s) from Robert Davidson to Eloha (USA)
Hi pretty..u Look like u wont hurt a Fly in the sky....?