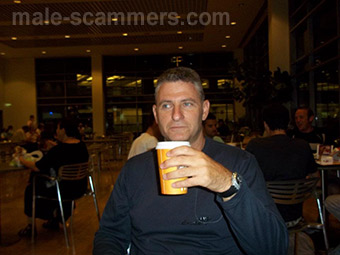 REPORT N1 (added on September, 23, 2015)
Gillian (UK)
I met Ryan Branagh on match and he wrote to me. I was surprised because I am 6 years older than him and only 145cm tall while he is 187 cms. I brought this to his attention but he did not mention this at all. He said that he was a widow and his wife died of Ovarian cancer. They had no children. He was originally from Dalkey, Ireland. Then his parents moved to Canada where he studied structural engineering and where he also met his wife, who was an American. When they got married, they went to live in Baltimore, Maryland to be close to his wife's family. He has been 17 years now in the USA. He will be retiring in 3 months time and wants to move back to Britain, hence he is looking for his future wife in the UK.
He said that he owned his company and was the CEO. He gave me his website which is:- http://www.bragc-engineers.com
He also sent me his photograph. He gave his telephone number as he preferred to talk rather than write and warned me that his accent was strange because of his roots. I called his number but there was no response, so I sent him an email. He wrote back to say that he was in another state on business and would be back after a week. Since then, I have not heard from him. Then I googled and came across his name and a report written by someone about him and the website he gave her was the same one, he gave me. I became suspicious.

That's was a hilarious Joke and my sincere apologies for my late replies.I have observed that you are very straightforward in your emails,I always respect a woman who know what she wants ,That's a trait i admire in ladies.
We both have a lot of things in common and that is a very good thing.
I am tired of waking up in this bed all alone, I am tired of eating alone and sleeping alone.
I always dream of the day ,I would to bed and wake up in the arms of a lovely wife. I miss going to the beaches ,holding hands and public display of affection.
I have a very fragile and tender heart and once i fall in love with someone,I always give all of me to make sure the relationship is successful.
I have to stop here , emailing cannot be compared to talking,Here is my Tel Number: +1 410-988-4725.Give me yours too.I would love to call you and you can call me any time too so we can talk,but i must warn you, i have a funny accent due to my Roots.
I will be loo
Read more