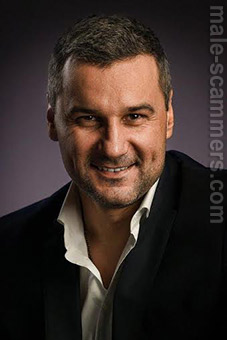 REPORT N1 (added on September, 15, 2015)
Nataliya (Cyprus)
I'm so tired from internet scammer!!!
seems they occupied all internet space by lie and asking- demanding money they act in one way writing so sweet letters, even making once phone call, never exists dialog, just their monolog about sweet the best things ..they never answer for yours questions and can not confirm real look in to web cam, they ignore yours asking to see in to web cam to identify they personality..
after a few letters they say tragedy hystory about car accident with their kids and demand from you pity and say that you are just alone his friend who must to help to him by money cause he is far from his home and kids are in hospital and need urgent medical help...
now they creat revenge if you ignore them and say about that they are scammers, they write on web site which your use and ask to delete profile of unguilty people blaming them in fake photos!!!
REPORT N2 (added on September, 22, 2015)
Theresa (USA)
Met and chatted with this scammer through Tagged. Gave me his mobile number and we chatted and talked on Viber. He sounded like a black. Claimed he is from Romania residing in New York.
REPORT N3 (added on September, 21, 2016)
Eloha (USA)
Scammer - fake - Image stolen from a russian entrepreneur.
REPORT N4 (added on September, 21, 2017)
Petra (USA)
Scammer who sent me a friend request on Tagged - image stolen.
REPORT N5 (added on February, 23, 2018)
Kay (USA)
David contacted me on the dating website, immediately asking to move conversation to text message. Stated that he lives in Arizona, but is away on business in South Africa. Stated he was a widower, loosing his wife and daughter in a car accident years back and that his son is in University in London. States that he deals in selling medical equipment and that he was sent by his company to South Africa because their shipment was delayed and he was to check on it. He was to be there 1 week and had been there 2. He professed a commitment to me within hours, and within 24 hours had dropped and broken his phone, but had an older one as a back up and began asking me to purchase and send him iTunes gift cards.
REPORT N6 (added on January, 15, 2019)
Kerstin (Germany)
Custom problems in China money tranfered by Western Union 6. Mr WENYING LI and Mr. EXIU HE received the money for Mr. Neville Fox.
Requested money Euro 5500 = $ 5874,13.
Money transfer split in 4 times.
REPORT N7 (added on July, 2, 2019)
Elena (Russia)
Presents himself as UN DICOTOR, working in Syria. Fake documents as UN staff.
REPORT N8 (added on February, 20, 2019)
Leslie (USA)
Bluemaxxgulf
About: Non-Smoker with Average body type
City: Atlanta, Georgia
Details: 58 year old Male, 5'9
REPORT N9 (added on July, 29, 2020)
Anastasia (Poland)
This is another name of the scammer. Ladies be aware he steels a lot of money.
Pretends to be a doctor under UN, oil rig engineer.
Very crafty and dangerous as well. His latest scam was parcel delivery scam.
Uses the photos of Russian businessman.
Uses fake ID documents fromUN and fake passport.
Will sing you ballads saying that he is totally in love with you, don't you give him any money.
REPORT N10 (added on October, 27, 2020)
Carol (USA)
"Am a man of honor.....
God first..
Let love lead."

How are you my dear, hope all is well with you. It’s my pleasure meeting you online that very day and i was so glad your time with me was so nice of you an ever since then,i really develop a serious interest on you after viewing your profile and had chat with you , and I wrote you a message in your email address because I don't usually have time accessing my account on that site we meet here on badoo. i think there is something special between two of us that motivates me searching through your profile also my chat with you that very day to my request of sending a message to your email address. The attachment is my pictures hope you will like me.

My name is Lawernce like i have told you told,i am from Norway i was born on 5th January 1965. i got married before i and my late wife were blessed with one son before she died after a brief illness .she passed away last 9 years ago. am a marine engineer working with SMC Shipping Company Cyprus i ha
Read more